by Matt Agorist , published on The Freedom Thought Project, on February 1, 2017

Los Angeles, CA — In a massive statewide operation targeting human traffickers, hundreds of people were arrested and dozens of sexually-exploited children were saved. 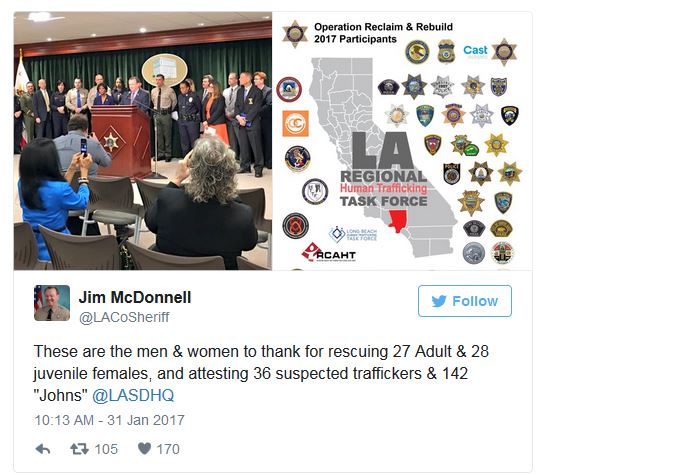 The bust was part of a statewide operation to combat human trafficking, the Los Angeles County Sheriff’s Department announced Tuesday.

According to KTLA, more than 30 federal, state and local law enforcement agencies and task forces, as well as the Los Angeles Regional Human Trafficking Task Force, participated in the third annual “Operation Reclaim and Rebuild” enforcement operation, according to a sheriff’s news release.

The operation resulted in 474 arrests including 142 males on solicitation charges, and 36 males for pimping.

It is important to note that some of these arrests included people trying to simply pay another willing adult to have sex with them.

In the Land of the Free, it is against the law to get paid to have sex, unless that sex is filmed, distributed on DVD, and taxed. One of the least talked about systems of oppression in the US is that of persecuting prostitutes.

When referencing prostitution, it is critical to point out that we are talking about the mutually beneficial exchange of sexual favors for money by two or more consenting adults; not forced human trafficking.

That being said, however, during the operation, officers rescued 28 children who were being sexually exploited and offered services to 27 adults they said were victims of sex trafficking. These victims were not part of a voluntary process and instead were bought and sold as commodities to sick individuals without their consent.

As corporate media writes off talk of ‘pizzagate’ as if it’s some tinfoil conspiracy theory that couldn’t possibly happen, this scenario shatters their claims. In fact, Los Angeles County Sheriff Jim McDonnell says the arrests represent a “very sad commentary on the condition we’re dealing with.”

While it is currently unknown if any of these charges involve high-level government officials or law enforcement, the fact that it existed should not be ignored. Throughout the first and second weeks of December, since the mainstream media first reported that Edgar Maddison Welch, of Salisbury, N.C., fired a shot inside the Comet Ping Pong Pizzaria in Washington, DC, the mainstream media has been declaring the so-called child-sex “Pizzagate” child-sex ring, a false conspiracy theory based on lies.

Welch was reportedly searching for child-sex slaves inside Comet Ping Pong based on stories he’d read online involving pedophilia and the Washington elite. Ironically, and without any real investigative, Chris Hanson style journalism being conducted, the mainstream media and its pundits have declared all the claims found in the conspiracy theory to be false, lies constructed by “fake news.”

In fact, The Washington Post simply declared, “None of them were true.” That may, indeed, be the case. But if it can happen in California on such a large scale, it can certainly happen anywhere else in the United States, and all such claims must be investigated thoroughly by properly trained police officers with the tools necessary to uncover such deviant sex crimes involving children. We applaud the California authorities for their investigations of child-sex rings. May justice be swift to the sickos involved in exploiting children.