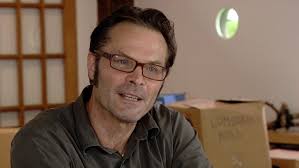 The New York artist Mark Lombardi was known for his sociograms, in which he portrayed politico-economic power structures.

His sudden death in 2000 left him with a mistrust of the official investigation, but also speculation about the criminalistic significance of his work: Is it true that Mark Lombardi was killed, or was he the victim of a conspiracy?

Was the artist under persecution or was he actually shadowed?

What role does his masterpiece BCCI play in the investigations of the FBI on the terrorist attacks of 11 September 2001?

“Mark Lombardi – Art and Conspiracy” explores the abysses of money and politics through the artist’s pictures. Lombardi was greedy for information. What he sought was and is accessible to everyone. Who influences political decisions? How are the money flows?

On small maps he collected his enormous knowledge – a cartography of power. 14,000 such cards have left Lombardi. His real genius, however, lay in linking the facts to a complex universe, which he visualized in his beautiful and disturbing network diagrams.

Lombardi’s fate shows how much power is contained in information and what dangers they harbor.

The documentary offers an exciting portrayal of artists, exploring how Lombardi’s works have come about and what they do.