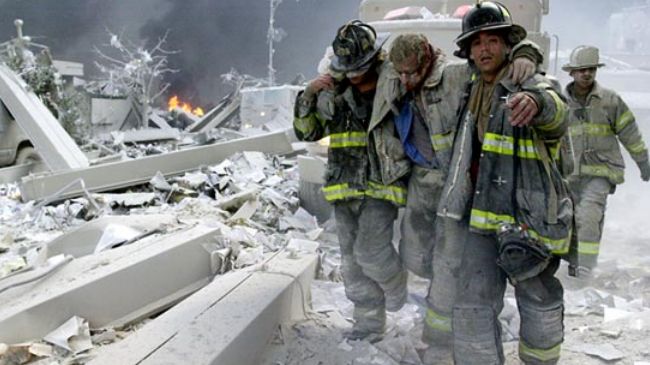 The aftermath of the 9/11 attack

Several leading American mainstream journalists say that the US government is lying about 9/11 and the so-called war on terror. Unfortunately, media owners and editors won’t let them report their findings.

Recently, Seymour Hersh, America’s top mainstream investigative reporter, broke the news that the US government’s claim to have killed Osama Bin Laden on May 2nd, 2011 is “a big lie. There is not one word of truth in it.”

Hersh went on to harshly criticize his long-time employer, the New York Times, and other big media outlets: “We lie about everything, lying has become the staple.” He said all big US media outlets should be shut down for lying to the American people.

Other mainstream journalists agree that the US government’s story of Osama Bin Laden and 9/11 is a big lie. Sherwood Ross, an award-winning journalist who has worked for the City News Bureau of Chicago, the Chicago Daily News, and for Reuters and other wire services, told me in a recent radio interview:

“It’s very doubtful that Muslims were behind 9/11. Think about this for one minute: That President Bush’s family had done business with the family of the man who allegedly made the terrorist attack, Osama Bin Laden. The Bin Laden family was actually on the board of Bush’s oil company. How is it possible that of all the billions of families in the world, the one family that makes the attack on America has done business with the President of America. That sounds more like a favor than anything else. I don’t think 9/11 was an Arab conspiracy or a Muslim conspiracy. I think it’s an American conspiracy to overthrow the government of the United States and install what is becoming a police state, and also to advance the imperial ambitions of the United States, to swindle the Middle East out of their energy resources.”

Ross explained that American journalists are no longer free to expose even the most outrageous official falsehoods and fabrications:

“You don’t see any serious questioning by the mainstream media. I thought one of the tip-offs that it was a put-up job was when a cameraman from a little weekly in Pennsylvania went to the site where this airliner had supposedly crashed (on 9/11). And he said, ‘I didn’t see any airliner. I saw a hole in the ground. I didn’t see any bodies. I didn’t see any luggage.’ All right, maybe that guy just made this up. But I don’t think so. I think he was just doing his job. And then at the Pentagon, you had the claim that airliner hit it. But again, there was no wreckage. Reporters who worked in the Press Room at the Pentagon went out there on the lawn, and they couldn’t see any airliner. So, over and over again, you have manufactured lies that the press largely is not reporting.”

I asked Ross whether he is allowed to express such views in his articles for the Miami Herald, the Chicago Daily News, or the wire services. He answered:

“Absolutely not. When I used to write for Reuters, covering workplace issues, for ten years, my columns were picked up from the New York Times to the L.A. Times. But if you write about ‘why did 7 World Trade Center collapse when it wasn’t hit by an airplane,’ nobody will pick it up. So, now my columns are used on the Internet by bloggers, and they’re used by Middle East wire services. I get phone calls from Press TV, and you can read my interviews there. But you won’t see me quoted by the Associated Press.”

Another leading American journalist, Paul Craig Roberts, has also been banned from US mainstream media for telling the truth about 9/11. Dr. Roberts served as Assistant Secretary of the Treasury, won the French Legion of Honor and other awards for his contributions to economics, and has been a regular columnist for the Wall Street Journal, Business Week, and other mainstream publications. But since he spoke out about the controlled demolitions of the three World Trade Center skyscrapers on 9/11, Paul Craig Roberts has been put on the mainstream media’s no-publish list.

In a recent interview on my radio show, Dr. Roberts explained why the US mainstream media, as Seymour Hersh said, lies about everything:

“One of the worst things that ever happened (to America) was when President Clinton allowed five companies to concentrate the American media. That destroyed its independence. And ever since Clinton permitted that, which was totally against all American tradition, and totally against the antitrust law … but in the United States, as we’ve seen, law doesn’t mean anything anymore. The minute these five conglomerates concentrated the media, the independence of the media disappeared. It’s no longer run by journalists, it’s run by corporate advertising executives. The value of these media conglomerates resides in their federal broadcast licenses. And so they can’t dare offend the government. Their licenses may not get renewed, and the entire multi-billion-dollar value of the companies would disappear. So, the so-called mainstream media is no longer the media. It doesn’t tell you anything. It’s a propaganda ministry – the Ministry of Propaganda. Gerald Celente calls them ‘presstitutes.’”

Rather than writing for the mainstream media, Paul Craig Roberts is now exposing the fake killing of Osama Bin Laden and deconstructing the 9/11 false-flag operation for an independent outlet called the Institute for Political Economy. In a recent article published on the 12th anniversary of the 9/11 attacks, Dr. Roberts wrote:

“The neoconservatives who advocate America’s hegemony over the world called for ‘a new Pearl Harbor’ that would allow them to launch wars of conquest … No evidence exists that supports the government’s 9/11 story … On this 12th anniversary of a false-flag event, it is unnecessary for me to report the voluminous evidence that conclusively proves that the official story is a lie. You can read it for yourself. It is available online. You can read what the architects and engineers (for 9/11 truth) have to say. You can read the scientists’ reports. You can hear from the first responders who were in the WTC towers. You can read the pilots who say that the maneuvers associated with the airliner that allegedly hit the Pentagon are beyond their skills and most certainly were not performed by inexperienced pilots. You can read David Griffin’s many books. You can watch the film produced by Richard Gage and Architects & Engineers for 9/11 truth. You can read the 9/11 Toronto Report, International Hearings on 9/11.”

But don’t bother reading the mainstream media. As Seymour Hersh, Sherwood Ross, Paul Craig Roberts, and a rapidly growing number of ordinary Americans realize, the mainstream media’s motto is now: “We lie about everything. Lying has become the staple.”

The government’s not demanding an investigation into an event that is the greatest embarrassment to a “superpower” in world history is a complete give-away that 9/11 was a false-flag event.