Magic And The Collective Consciousness 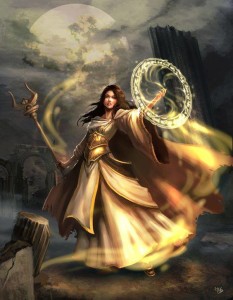 Magic And The Collective Consciousness

Consciousness shapes the reality you exist in. Your consciousness dictates how you fit into the collective version of the whole,

but the collective consciousness dictates what we all agree upon as “reality”.

Since the majority of humanity is blocked from recognizing their own internal universe/mastery, the lie that magic is not real has been easily sold to the majority of the collective, thus trapping everyone else incarnated onto the planet in the lie that we cannot physically transform our world with nothing more than our thoughts and energy.

The small minority of humanity that not only listens to the internal world, but also works with it have access to the magic that is within, but since the collective do not agree that magic is real, the internal magic does not make itself known in the physical reality.

What we are forced into abiding by, due to the collective agreement of the non reality of magic, is manipulating the unseen energies.

By opening up your internal channels and clearing out the sludge and blockage of generation after generation of energetically ignorant masses from your personal soul vessel (physical and energetic bodies), you are literally doing the very essence of the term, “Light Work”.

You are finding the invisible weights and blockages that are keeping humanity stuck in a cycle of vicious self perpetuating trauma, and dissolving them.

By cleaning out your own personal field, you are by proxy injecting this possibility back into the collective consciousness.

More and more are realizing the mastery they have in their own bodies. More and more are turning on the internal magic, activating chi flow, and lighting themselves up in the truest sense of the words.

What is happening is the beginning of a revolution of consciousness. By doing your own internal shadow work, by cleaning yourself out of stagnant emotions, traumas, grudges and clashes, you are pushing forward with everyone else doing the same. You are step by step, forcing the collective consciousness to begin to include the innate knowledge of chi….of the Force.

When enough understand that they can heal themselves, turn back the hands of time and regenerate anything they need to with nothing more than their own breath and a smile, then….then magic will become real.

When the majority recognizes the magic of the internal universe, unseen, but absolutely felt in every significant way possible, then we will see a true transformation of the world around us. Then will magic once again be real.

From my heart to yours,
Eric

Find out more about Eric on his website Unleashing Natural Humanity