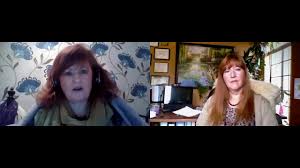 Magenta Pixie is Alexandra’s guest for this lively, insightful, and very timely interview. Magenta Pixie, told by her guides she would be a “medium for other mediums”, produces beautiful and inspiring videos reciting her channelings from nine White Winged Beings that she calls ‘The Nine’. These channelings, and her commentaries on them, can be found on her website and at her Youtube channel (see below for links).

Here she speaks with Alexandra about a wide range of topics of common, even pressing, concern for lightworkers and starseeds as we pass into a period The Nine call “The Great Reveal”. Magenta also recounts elements of her own fascinating story, starting with early encounters in the 1990s with The Nine – at that time in the form of a single being – and her call to go public in 2008.

The present onrush of ascension energies is naturally a hot topic of conversation but Alexandra and Magenta Pixie discuss some fascinating larger contexts as well.
Magenta offers illuminating commentary on the significance of starseed work accomplished by December 21, 2012, and its four-year reflection we just passed in December 2016.

Though many people thought matters would proceed more swiftly after 2012, Magenta offers a perspective that the service-to-others crowd have in some sense drawn things out since our higher selves have always intended to create timeline paths to ascension for the largest possible number of souls.

Magenta fleshes out several new perspectives on the significance of our present “nodal point” as well. She comments on the Trump election, his anti-mass media remarks, and the higher significance of the passage from 2016 into 2017, as well as of an upcoming four-year cycle to 2020-21.

Magenta and Alexandra discuss the present mounting energetics of ascension, and they indicate some upcoming waves and cycles in 2017, year of the Fire Rooster or Phoenix, and critical year of “The Great Reveal”. Magenta comments on the new energies’ effects on humanity and upon the timelines of starseeds and other humans, as well as upon Mother Earth, on animals, both those in the wild and our pets, all of whom may be ‘ascending’. Though Magenta feels that humanity will bear some karmic repercussion for its abominable treatment of Mother Earth, the worst catastrophes have been already averted on our timeline, and prospects are good that large numbers of people will experience higher timelines.

An interesting conversation about how this was secured ensues (though the conversation occasionally is broken by storms on both sides of this California-to-England video interview). Political figures, especially presidents, and the yet more important role of grid-workers like Alexandra are key components to the stabilization of Gaia/Sophia’s so far smooth-and-steady awakening.

This captivating interview is wide-ranging, multi-dimensional, and profound, yet always pertinent to our extraordinary times. Enjoy!

Magenta Pixie’s new book is Masters of the Matrix: Becoming the Architect of Your Reality and Activating the Original Human Template
http://www.magentapixie.com/masters-o…

Her Youtube channel is: Magenta Pixie
https://www.youtube.com/user/MagentaP…
The views and opinions expressed herein are those of person(s) interviewed and do not necessarily reflect those of Alexandra Meadors and Galactic Connection.
Check out our Daily Blog page: galacticconnection.com/daily-blog
Like our Facebook page: facebook.com/GalacticConnection
Follow us on Twitter: twitter.com/GalacticConnect