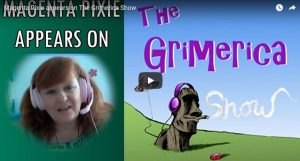 Magenta Pixie’s appearance on The Grimerica Show, originally broadcast June 10th 2018. Show description: Magenta Pixie joins us to talk about New Age versus Truthers, her channelling of the White Winged Collective Consciousness of Nine, and working on ourselves. We also get into global politics, the control system of the world, lightworkers, disclosure films, the gaming community, the indigo revolution and much more.