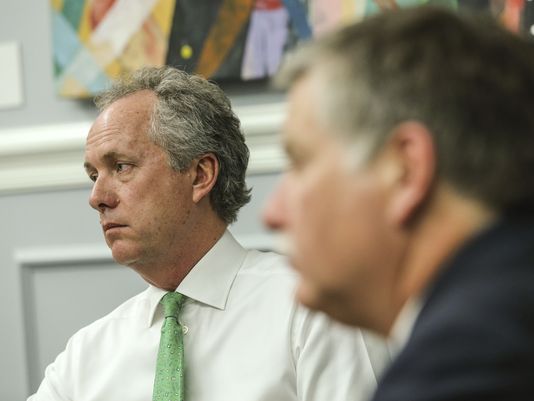 LOUISVILLE, Ky. — Louisville’s mayor announced that he has asked the FBI to investigate what he called “our worst nightmare,” the alleged sexual abuse of children in the police department’s Youth Explorer program.

Mayor Greg Fischer also said he had hired former U.S. Attorney Kerry Harvey to review an investigation conducted by Louisville Metro Police and determine whether “errors were made,” including by police Chief Steve Conrad.

“If there has been an injustice, it will be remedied,” Fischer said Friday.

Harvey, who was appointed by President Obama in 2010 as the top prosecutor in the Eastern District of Kentucky and stepped down in January, said he would conduct a “stem-to-stern review” to determine if the investigation was effective and appropriate – and if procedures were not followed, “why not.”

Scout: I was raped by Louisville police officers

The Courier-Journal reported this week that Conrad ended an investigation of alleged “improper contact” between Betts and a teenage girl in the program because Betts resigned in 2014. Wood is still with the force but on administrative assignment.

Conrad told The Courier-Journal on Friday he is “dying” to talk about the allegations but is barred from doing so by a court order sealing the lawsuit. Fischer said he expects the case will be unsealed next week.

The Courier-Journal has filed a motion to unseal the case. The city has also asked that it be unsealed.

Fischer said he first learned about misconduct in the Explorer program last October when he received a heads-up from Conrad that there would be media reports. The mayor declined to comment when asked whether additional police officers or youths were involved, citing a pending criminal investigation by the department’s Public Integrity Unit.

Asked if he still has confidence in Conrad, the mayor initially avoided directly answering the question, saying “what is important is to get to the truth, and I think he agrees with that.” Ultimately, Fischer said he did have confidence in the chief.

Fischer also said Conrad was “aligned” with the decision to hire Harvey, who was retained Friday under a $275-an-hour contract capped at $50,000. Harvey will not have subpoena power but will enjoy the “full power of the mayor,” Fischer said.

The city also will conduct a separate inquiry that will examine all agencies that have programs involving children and teenagers to determine if adequate measures are in place to protect them.

Harvey resigned as a U.S. attorney this year in anticipation that President Trump would name a Republican to the post. He said it would be up to the FBI to decide whether to launch its investigation, but that based on news reports, the alleged misconduct could constitute a federal civil rights violation.

Councilman David James said Friday he was glad the mayor reached out to the FBI. But he said whatever review Harvey conducts should include the mayor’s office because former police commanders who were in the department at the time of the allegations are now in the Fischer administration.

“It’s important we not just limit it to the police department, but knowing who knew what when, and wherever that goes is important,” James said.

Councilman James Peden, who joined James and nine other members in calling for an outside agency to investigate on Thursday, said he was pleased the mayor sought the FBI’s help. But he said he doubts whether hiring Harvey will bear any results.

“I’ve been doing this long enough to know if you hire someone to do studies or investigate, they come up with results you wanted them to find in the first place,” Peden said. “I think that’s a waste of money.”

James, a Democrat, and Peden, a Republican, said they met with Conrad about the Explorer program weeks before the suit was filed. Both said they’ve received information from police officers that there could be more allegations.

“If anything, (Mayor Fischer) finally realizes this has now extended beyond the boundaries of just a bad police officer,” Peden said.