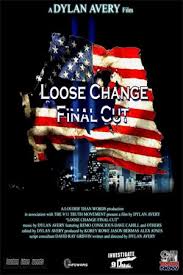 Loose Change is a series of films released between 2005 and 2009 which pursue a theory of Government involvement in the 911 attacks on America. They investigate theories, and research evidence unsupportive of the Governments position. The films were written and directed by Dylan Avery and produced by Korey Rowe, Jason Bermas and Matthew Brown.

The original 2005 film was edited and re-released as Loose Change: 2nd Edition (2006), and then subsequently edited a third time for the 2nd Edition Recut (2007). Loose Change: Final Cut, deemed “the third and final release of this documentary series” was released on November 11, 2007.

Another version of the film, Loose Change 9/11: An American Coup, released on September 22, 2009, is narrated by Daniel Sunjata and distributed by Microcinema International.

Coverage of the film increased in 2006 with the recut release having airings on U.S. and European television stations and over 4 million views online in four months, leading Vanity Fair to say it could be the first internet blockbuster. Loose Change asserts that the usual account of the Pentagon attack, World Trade Center collapse and United 93 phone calls and crash is implausible and instead suggests the 9/11 attacks were a false flag operation.
Please check out their website at http://www.loosechange911.com/