Look What Wikileaks Revealed About The Tunnels In Afghanistan That Were Just Bombed!!

Look What Wikileaks Revealed About The Tunnels In Afghanistan That Were Just Bombed!!

by Baxter Dmitry, pubished on Investment Watch Blog, on April 14, 2017 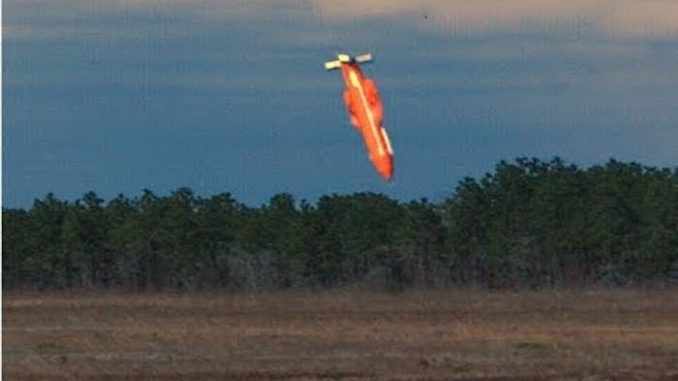 The devastating MOAB dropped on Afghanistan destroyed tunnels financed by the CIA in the 1980s, according to information contained in an old New York Times article posted by WikiLeaks on Thursday.

Remember when the mainstream media used to print real news?

The article, published in 2005, explains that the tunnels now being bombed by the U.S. in Afghanistan contain “bunkers and base camps, dug deeply into the steep rock walls” and are “part of a C.I.A.-financed complex built for the mujahedeen.”

In the 1980s the CIA was financing and arming jihadi rebels in Afghanistan and using them as a proxy force in a war against Soviet Russia. The mujahedeen, led by Osama bin Laden, emboldened by success and flush with CIA cash, later went on to form al-Qaeda. 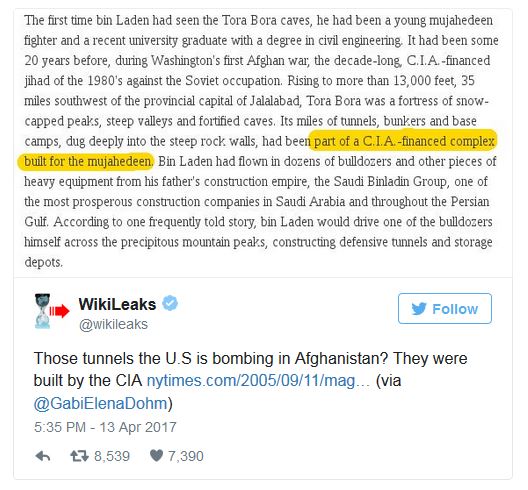 The first time bin Laden had seen the Tora Bora caves, he had been a young mujahedeen fighter and a recent university graduate with a degree in civil engineering. It had been some 20 years before, during Washington’s first Afghan war, the decade-long, C.I.A.-financed jihad of the 1980’s against the Soviet occupation.

Rising to more than 13,000 feet, 35 miles southwest of the provincial capital of Jalalabad, Tora Bora was a fortress of snow-capped peaks, steep valleys and fortified caves. Its miles of tunnels, bunkers and base camps, dug deeply into the steep rock walls, had been part of a C.I.A.-financed complex built for the mujahedeen.

Bin Laden had flown in dozens of bulldozers and other pieces of heavy equipment from his father’s construction empire, the Saudi Binladin Group, one of the most prosperous construction companies in Saudi Arabia and throughout the Persian Gulf.

Indeed, by December 2001, when the final battle of Tora Bora took place, the cave complex had been so refined that it was said to have its own ventilation system and a power system created by a series of hydroelectric generators; bin Laden is believed to have designed the latter. Tora Bora’s walls and the floors of its hundreds of rooms were finished and smooth and extended some 350 yards into the granite mountain that enveloped them.

Sounds like a very elaborate, expensive CIA-funded set-up Bin Laden had in the Tora Bora. And now it’s costing billions to destroy. Perhaps the government could have saved everybody’s time and money by not financing the jihadis and their elaborate caves in the first place?

In his first speech as director of the CIA, Mike Pompeo, who once tweeted and applauded disclosures by WikiLeaks, attacked the group on Thursday as a stateless “hostile intelligence service” eager to do the bidding of Russia and other American adversaries.

But Mr. Pompeo’s strongest words were reserved for Julian Assange, calling the WikiLeaks founder a “narcissist” and “a fraud — a coward hiding behind a screen.”

“In Kansas, we know something about false wizards,” added Mr. Pompeo, who represented a congressional district in the state until he was tapped by President Trump to run the C.I.A.

Julian Assange wasted no time hitting back – and he hit hard.

No response from the CIA Director as yet. What could he possibly say to refute that?