published on The Daily Economist, on February 3, 2017

Ever since China began to duplicate Western financial institutions starting in 2013, more and more nations have begun matriculating towards the East, and away from dollar hegemony.  And one of the most important of these new infrastructures is the Chinese CIPS platforms which functions for the RMB the same way SWIFT does for the dollar.

Yet unlike the way SWIFT charges for swaps when nations have to use the dollar as a middleman since it still reigns as the world’s singular reserve currency, CIPS allows for much lower transaction fees and the convenience of bypassing the U.S. currency through direct bi-lateral currency settlement. 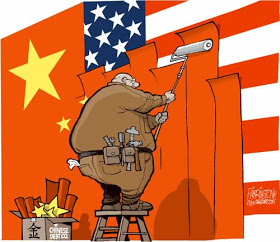 Hiroshima Bank and 13 other Japanese regional banks will connect to an interbank payment network that enables direct yuan wiring to mainland China — a move that will lower transaction fees and boost convenience for customers.

Joining the China International Payments System will reduce fees and processing days. Juroku Bank and Joyo Bank are also among the Japanese banks taking advantage of the system introduced by the People’s Bank of China. They will be connected one by one after the end of the Chinese New Year holidays via the Bank of Tokyo Mitsubishi UFJ, which connected to the system last year.

Previously, payments to mainland China had to be processed by clearing banks such as those in Hong Kong. CIPS can cut costs by several dollars (10 yuan equals $1.45) per transaction. Payments can be completed on the same day if certain conditions are met. – Asia.Nikkei

As the world continues to reject the dollar and the old financial model of a singular reserve currency, more countries are seeing the benefits of transacting in a bi-lateral environment.  And once enough of these nations decides to follow this new economic model being laid out from Beijing, and create the critical mass needed to bypass the dollar completely, then the reserve currency will simply fade away via de facto consent, and force change onto the Western institutions that have run the global financial system for decades.