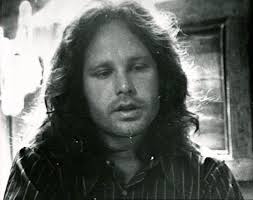 Lizzie James: I think fans of The Doors see you as a savior, the leader who’ll set them all free. How do you feel about that? It’s kind of a heavy burden, isn’t it?

Jim Morrison: It’s absurd. How can I set free anyone who dosen’t have the guts to stand up alone and declare his own freedom? I think it’s a lie–people claim they want to be free–everybody insists that freedom is what they want the most, the most sacred and precious thing a man can possess. But that’s bullshit! People are terrified to be set free-they hold on to their chains. They fight anyone who tries to break those chains. It’s their security….How can they expect me or anyone to set them free if they don’t really want to be free?

Lizzie: Why do you think people fear freedom?

Jim: I think people resist freedom because they’re afraid of the unknown. But it’s ironic … That unknown was once very well known. It’s where our souls belong … The only solution is to confront them — confront yourself — with the greatest fear imaginable. Expose yourself to yourself to your deepest fear. After that, fear has no power, and fear of freedom shrinks and vanishes. You are free.

Lizzie: What do mean when you say “freedom”?

Jim: There are different kinds of freedom — there’s a lot of misunderstanding … The most important kind of freedom is to be what you really are. You trade in your reality for a role. You trade in your senses for an act. You give up your ability to feel and in exchange, put on a mask. There can’t be any large-scale revolution until there’s a personal revolution, on an individual level. It’s got to happen inside first.

You can take away a man’s political freedom and you won’t hurt him — unless you take away his freedom to feel. That can destroy him.

Lizzie: But how can anyone else have the power to take away from your freedom to feel?

Jim: Some people surrender their freedom willingly–but others are are forced to surrender it. Imprisonment begins with birth. Society, parents; they refuse to allow you to keep the freedom you are born with. There are subtle ways to punish a person for daring to feel. You see that everyone around you has destroyed his true feeling nature. You imitate what you see.

Lizzie: Are you saying that we are, in effect, brought up to defend and perpetuate a society that deprives people of the freedom to feel?

Jim: Sure … teachers,religious leaders-even friends, or so-called friends — take over where the parents leave off. They demand that we feel the only feelings they want and expect from us. They demand all the time that we preform feelings for them. We’re like actors-turned loose in this world to wander in search of a phantom … endlessly searching for a half-forgotten shadow of our lost reality. When others demand that we become the people they want us to be, they force us to destroy the person we really are. It’s a subtle kind of murder … the most loving parents and relatives commit this murder with smiles on their faces.

Lizzie: Do you think it’s possible for an individual to free himself from these repressive forces on his own — all alone?

Jim: That kind of freedom can’t be granted. Nobody can win it for you. You have to do it on your own. If you look to somebody else to do it for you — somebody outside yourself — you’re still depending on others. You’re still vulnerable to those repressive,evil outside forces, too.

Lizzie: But isn’t it possible for people who want that freedom to unite — to combine their strength, maybe just to strengthen each other? It must be possible.

Jim: Friends can help each other. A true friend is someone who lets you have total freedom to be yourself-and especially to feel. Or not feel. Whatever you happen to be feeling at the moment is fine with them. That’s what real love amounts to — letting a person be what he really is … Most people love you for who you pretend to be … To keep their love, you keep pretending — preforming. You get to love your pretense … It’s true, we’re locked in an image, an act — and the sad thing is, people get so used to their image — they grow attached to their masks. They love their chains. They forgot all about who they really are. And if you try to remind them, they hate you for it — they feel like you’re trying to steal their most precious possession.

Lizzie: It’s ironic — it’s sad. Can’t they see that what you’re trying to show them is the way to freedom?

Jim: Most people have no idea what they’re missing. Or society places a supreme value on control — hiding what you feel. Our culture mocks “primitive cultures” and prides itself on supression of natural instincts and impulses.

Lizze: In some of your poetry, you openly admire and praise primitive people — Indians, for instance. Do you mean that it’s not human beings in general but our particular society that’s flawed and destructive?

Jim: Look at how other cultures live –p eacefully, in harmony with the earth, the forest — animals. They don’t build war machines and invest millions of dollars in attacking other countries whose political ideals don’t happen to agree with their own.

Lizze: We live in a sick society.

Jim: It’s true … and part of the disease is not being aware that we’re diseased … Our society has too much to hold on to,and value — freedom ends up at the bottom of the list.

Lizze: But isn’t there something an artist con do? If you didn’t feel you, as an artist, could accomplish something, how could you go on?

Jim: I offer images — I conjure memories of freedom that can still be reached — like The Doors, right? But we can only open the doors — we can’t drag people through. I can’t free them unless they want to be free — more than anything else … Maybe primitive people have less bullshit to let go of, to give up. A person has to be willing to give up everything — not just wealth. All the bullshit he’s been taught — all society brainwashing. You have to let go of all that to get to the other side. Most people aren’t willing to do that.