by Jeff Ward-Bailey from Christian Science Monitor published on November 26, 2015 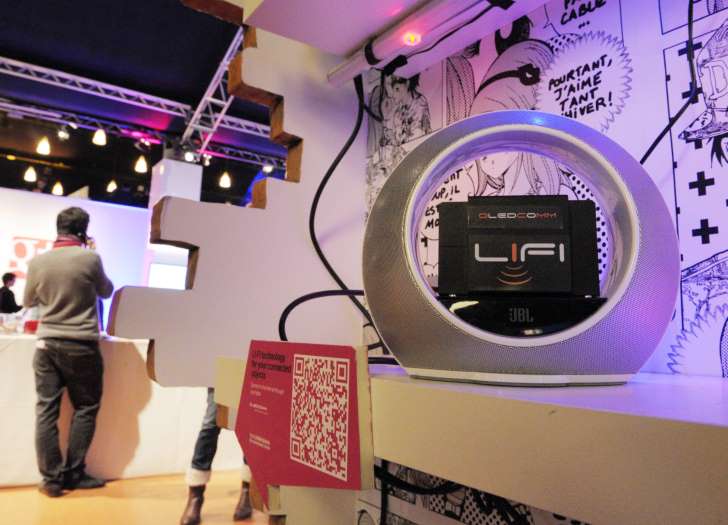 © Eric Piermont/AFP/Getty Images TO GO WITH AFP STORY BY TUPAC POINTU A view of a Li-Fi technology system,
which uses light to connect users to the internet and share data, on display at the FranceTelevisions stand inside the LeWeb Paris…

When the first version of the Wi-Fi protocol was released in 1997, it boasted wireless speeds of up to 2 megabits per second. Now, there’s Li-Fi, a potential successor to Wi-Fi that’s capable of transmitting data at 1 gigabit per second, about 100 times faster than today’s average home wireless connection and 500 times faster than that first incarnation of Wi-Fi.

Li-Fi uses LED bulbs switching on and off billions of times per second to transmit strings of data. Think of the way a Morse code operator would tap out a message, then speed up the process by several orders of magnitude.

Though the communication takes place in the visible spectrum, meaning humans can see the light that’s being emitted, the flickering happens far too fast for our eyes to notice it. In other words, to humans, a Li-Fi light bulb appears like any other, but actually transmits lightning-fast Internet at the same time.

Velmenni, an Estonian tech company that has installed Li-Fi in its offices, says that the technology has achieved speeds of up to 224 gigabits per second in the lab and 1 gigabit per second in real life, where transmissions must contend with other factors such as movement and interference from other light sources. An office or industrial park could be outfitted with smart LED bulbs that could send data and provide illumination simultaneously, Velmenni CEO Deepak Solanki told IBTimes.

There’s a catch, though: Because light can’t pass through walls or other obstacles, a Li-Fi access point can cover only a single room. That means multiple smart LEDs will be needed to cover an apartment or a house with speedy wireless coverage. But on the other hand, wireless interference will be greatly reduced.

If you live in an apartment building, your devices can probably pick up Wi-Fi networks belonging to your neighbors. Those networks, all sharing the same frequencies, tend to interfere with one another, slowing down speeds for everyone. (That’s why the 5 GHz Wi-Fi band tends to be faster: it can only be used by newer devices, so it’s relatively uncrowded.) But a network that uses visible light is neatly contained by the walls, floors, and ceilings of the rooms it covers – no bleeding into adjacent areas.

Li-Fi might also be more secure than Wi-Fi. Because the wireless signal doesn’t spill outside rooms or buildings, it’s much harder for an intruder to set up nearby and gain access to the network. The Telegraph reports that intelligence agencies are interested in the potential security of Li-Fi, and that airlines are considering the technology for providing Internet access during flights.

The technology is still in its infancy today, but within the next few years, flickering LEDs could let us transfer gigabytes in the blink of an eye.

This article was written by Jeff Ward-Bailey from Christian Science Monitor and was legally licensed through the NewsCred publisher network.