Letter From Flynn, Saving A Nation That Was Already Lost 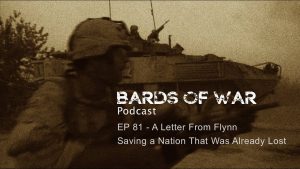 EP81 – Letter From Flynn, Saving A Nation That Was Already Lost

The common notion has been that the election of President Donald J. Trump occurred at just the right moment to revive the Country and keep it from falling off the cliff of Globalism, New World Order governance and the complete submission to the economics of scarcity and feudal rule. This perception is at the center of the current understanding of what is known as The Plan, by which a band of Q Patriots and a billionaire business man rose to power to restore America. The fact is that things were far worse than anyone ever realized. Bards Of War Podcast explores politics, culture, economics, faith, war and human nature by building context through story and narrative. Effective research will cross reference material to create a hybrid map built on qualitative and quantitative data cycling. This allows narratives to be developed, assessed and analyzed. This is the foundation of cultural analysis. The podcast episodes are presented by Scott Kesterson, a U.S. documentary filmmaker, backpack journalist, researcher and writer. Website: https://BardsOfWarFilm.com

1 Comment to “ Letter From Flynn, Saving A Nation That Was Already Lost”