Larry C. Johnson: Understanding What Sidney Powell is Doing to Kill the Case Against Michael Flynn 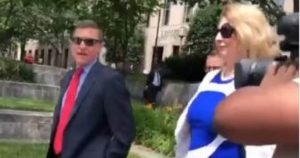 Larry C. Johnson: Understanding What Sidney Powell is Doing to Kill the Case Against Michael Flynn

by Larry C. Johnson, published on Protectors of Liberty, on November 9, 2019

Peter Strzok was interviewed on 19 July 2017 by the FBI and, according to his affidavit, pretended that he was asked on the 24th of January 2017 to interview General Flynn. He implied this was a last minute request. But as noted in the preceding paragraph, which is based on an interview of Strzok’s mistress, Lisa Page, a meeting took place the day before to orchestrate the ambush of General Flynn.

What is truly remarkable is that Peter Strzok stated the following, which exonerates Flynn of the charges in the indictment cited above:

Strzok and Pientka both had the impression at the time that Flynn was not lying or did not think he was lying. Flynn struck Strzok as “bright, but not profoundly sophisticated.”

The fact that the FBI Agents Strzok and Pientka did not to show General Flynn the transcript of his calls to refresh his recollection, nor did they confront him directly if he did not remember, exposes this plot as a contrived scenario to entrap Michael Flynn rather than a legitimate, legally founded investigation.

In fact, as noted by Sidney Powell, “the FBI and DOJ wrote an internal memo dated January 30, 2017, exonerating Mr. Flynn of acting as an “agent of Russia;” and, they all knew there was no Logan Act violation.”

But the malfeasance and misconduct of the FBI continued with the manipulation of the 302. “A FD-302 form is used by FBI agents to “report or summarize the interviews that they conduct”[3][4] and contains information from the notes taken during the interview by the non-primary agent.”

The notes taken by Agents Strzok and Pientka during their interview of Michael Flynn are damning for the FBI. These notes are Exhibits 9 and 10 in the sur sureply filed by Sidney Powell on 1 November 2019. (I wrote recently on the fact that the FBI/DOJ mislabeled the notes from this interview–see here). Neither Strzok nor Pientka recorded any observation that Flynn lied about his contacts with Kislyak. Neither wrote down anything supporting the indictment by the Mueller crowd that “Flynn lied.” To the contrary, Strzok swore under oath that he did not believe Flynn was lying.

The real problem for the Government’s fraudulent case against Flynn are the 302s. There should only be one 302. Not at least four versions. The FBI protocol is to enter the 302 into the FBI Sentinel system within five days of the interview. In other words, the original 302 should have been put on the record on the 29th of January. But that original 302 is MISSING. The prosecutors claim they cannot find it.

But the prosecutors finally did provide the defense, after repeated requests, multiple copies of 302s. They  dated as follows–10 February 2017, 11 February 2017. 14 February 2017 and 15 February 2017. WTF??? This alone is prima facie evidence that something crooked was afoot.

The final 302–dated 15 February 2017–painted General Flynn in the worst possible light. The “facts” of this 302 are not supported by the notes taken by Agents Strzok and Pientka. The conclusion is simple–the FBI fabricated a case against General Flynn. We now wait to see if Judge Sullivan will acknowledge this crooked conduct and exonerate the good General. Justice demands it.

These are not my facts. They are the facts based on documents submitted on the record to Judge Sullivan. I find it shocking that no journalist has had the energy or interest to cover this. Just one more reminder of the putrid state of journalism and investigative reporting. The charges levied against General Flynn by the Mueller prosecutors are without foundation. That is the stark conclusion facing any honest reader of the documents/exhibits uncovered by the Honey Badger. This kind of conduct by the FBI is just one more proof to support Colonel Lang’s wise observation that this institution, along with the CIA, should be burned to the ground and new institutions erected in their stead that are committed to upholding the Constitution and preserving the rights of the individual.