LARKEN ROSE: The Most Dangerous Superstition 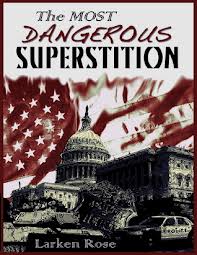 LARKEN ROSE: The Most Dangerous Superstition

The Most Dangerous Superstition, “The Myth of Authority” — There’s no such thing as a legitimate ruling class. Humanity wasn’t meant to be a domesticated species owned by a ruling class. The people who vote VOLUNTARILY put into power the people who ROB millions and millions of their own kind and then wage war on the other side of the world killing people for profit! Humanity itself was actually supposed to be the top where every human being owns themself and is in charge of their own life.

The belief in government literally takes good people and converts their energy and their production into power for the nastiest people in the world who go around murdering and robbing people by the millions and soon to be BILLIONS! People go along with the game that gets them enslaved just because they don’t understand that the game is a GIGANTIC LIE! It’s just an illusion. The global education system is based upon the ability to control people’s minds and limit their ability to think critically by using the Prussian Indoctrination System. Even people with Ph.D’s are like highly intelligent robots who are ONLY able to think within a confined set of options.

This is why so-called “science” in the academic or university realm has not yet come up with a way to solve the global pollution problem. Even TV shows like The Daily Show and The Colbert Report are part of the REPETITIVE propaganda distribution system. They try to make the news funny but it is STILL the propaganda dogma that they are constantly shoving down our throats!

Understand what Government REALLY is beneath the rhetoric and the propaganda that we are taught in school and that they don’t really care about “their” laws or about actual justice and just put on a facade of due process with flowery nice-sounding things but underneath it is just brute force domination and will lie, cheat, and steal to keep their human livestock enslaved.