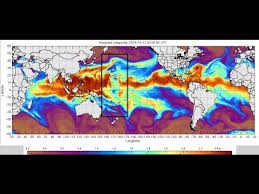 A large wave of energy impacting the entire planet has UNINTENTIONALLY been detected by the MIMIC TPW microwave background imagery. Currently ONGOING as of 12/19/2016 at 1:20am US central time)

link to see the event here:

This is not a glitch, computer error, or fake — unless someone at the University decided to fake data for some reason.

This system usually only shows precipitation / water vapor , yet in some rare instances large energy returns can be seen when solar, spaceweather, and other energy events impact the planet.

We have seen examples of X class flares, and large Earth facing Coronal Mass Ejections cause large disruptions of this very same feed — however this “wave” of energy produces a return that crosses the same bandwidths detected (and used by) the MIMIC microwave background system.

The energy spans the planet on both (all) sides over several hours time. This wave of energy started to form on 12/18 at about 15:00UTC, and is currently ongoing.

A check of the X-ray flux monitors from GOES shows low activity, minor solar winds, no major solar storms, Total Electron Content in the ionosphere shows “minimal”…. thus the source / cause of this event is still “unknown”.

If this “event” really occurred (if it’s “real”) then we’re looking at a huge amount of energy impacting the planet causing a planet wide microwave return going off the scales.

If the event is really occurring, then the potential amount of energy going to the core of the planet would be tremendous — this of course could increase volcanic activity, and cause large earthquakes.

I don’t know what to make of this — this is the first time I’ve ever seen something this large over such a vast area show up on MIMIC like this. Keep watch — the next week may tell the tale on what happens (if anything) from this strange event.

No voice in this video unless a large earthquake strikes.

Marker height off the globe = depth into the Earth.

The feed may show double earthquakes in some locations due to both USGS + EMSC agencies reporting the events.

When an earthquake strikes, you will hear a rumble, ding, and a bell toll. The bell will toll the number of times = to the earthquake which occurs. (example : M4.0 will ring 4 times).

The most recent earthquake has a green placemark / flag on it.

Blue flag / placemark = the last earthquake which was looked up

The moderators have been instructed to always give 1-3 warnings before either a time out or banning.

I now have a PO Box if viewers want to mail questions, donations, or mail packages / products they recommend to unbox on camera!