Krauthammer Explains the 4th Most Powerful ‘Branch’ of Gov’t; and It’s Something Voters MUST SEE!

Krauthammer Explains the 4th Most Powerful ‘Branch’ of Gov’t; and It’s Something Voters MUST SEE! 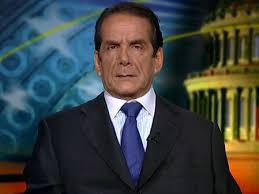 Charles Krauthammer explains how big government fights for its own interests against democratic elections.

The most important civics lesson that Americans need to learn is how Big Government fights for what it wants against the will and lawful orders of elected leaders. This video contains some Trump criticisms that I find unconvincing, but it is extremely valuable:

Opposition to President Trump from entrenched bureaucracies throughout numerous federal agencies is one of the “main conservative arguments against big government,” according to Charles Krauthammer.

Such bureaucracies, composed of civil service employees rather than government appointees that change with each new president, are alleged to be the source of critical leaks like the ones that led to the departure of former National Security Adviser Michael Flynn.

Remember, both Virginia and Maryland went for Hillary Clinton. They did so mainly in the counties near Washington, DC, which are filled with residents who feed off taxpayers and who see their economic future depends on the expansion of federal power—in addition to enjoying exercising that power over other Americans. When Krauthammer says that Big Government fights for its own interests, he refers to the thousands of federal workers.

And they don’t just vote and lobby and sponsor politicians who cater to their interests. They also obstruct, resist, and actively sabotage and undermine any elected leader who is voted into power by Americans who live in flyover country. We saw this in the case of Michael Flynn. They can remove cabinet members and probably do worse.

1 Comment to “ Krauthammer Explains the 4th Most Powerful ‘Branch’ of Gov’t; and It’s Something Voters MUST SEE!”