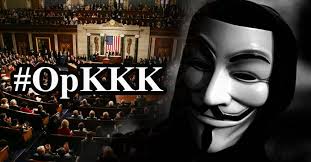 By now you have seen the threats by the hacktivist known as Anonymous saying they will expose 1,000 United States politicians that have ties to the KKK. Well, they have started to make good on their promise to leak the names.

We woke up this morning to find a video circulating the internet by Anonymous, an unknown group of hackers with a decentralized command structure, that claims to expose members of the KKK participating in the US Government as Senators and Mayors across the country.

Not only does the video reveal the names of the politicians, but also which KKK group they are affiliated with as well. It is unknown the source of affiliation or how Anonymous received the information.

The video states they are not going to put the home address of these KKK politicians out to the general public in fear of someone retaliating against these racist. However, they do put their full name, cities they work in and the address of their political office in the video.

The video exposing the names and pictures of the KKK politicians is only 2:52 secs long and doesn’t contain the promised 1,000 names. However, we are suspecting this is only a partial list and there are more to come in the near future. The list does include several prominent Senators and Mayors around the country thus far.

The hackers at Anonymous have rarely provided a “ threat” they didn’t deliver on in full. Thus, we are expecting additional names, faces and KKK ties to be revealed.

Here is a partial list of USA KKK Politicians according to Anonymous: