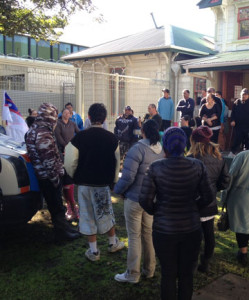 LATEST: The courtroom where about 80 people were this morning protesting the arrest of a Hawera woman has been cleared.

The protesters have moved outside the courtroom itself but are still refusing to leave the premises.

The court session has resumed, but the public gallery is still closed.

Kiri Campbell has been charged with four counts of using a document to gain a pecuniary advantage.

She was due to appear in the Hawera District Court this morning but her supporters turned out in force and caused the shut down of the courtroom.

A Taranaki Daily News reporter in the court said the media had been asked to leave for their own safety.

One man in the court was waving the Maori flag of the United Tribes and would not stop when asked, saying: “I do not consent to what you say, sir,” whenever approached by a court officer.

The judge refused to begin proceedings until the flag was removed.

Campbell’s plight has gained traction over the last few days on social media and has been associated with the Maori sovereignty movement.

She was an administrator of The One People Aotearoa-New Zealand Facebook page, which is linked to a “sister site” called Mortgage Terminators.

A group of 200 protesters forced the Hawera District Court to abandon proceedings this morning.

Judge Allan Roberts was to hear several cases as part of a standard police list day, but supporters of Kiri Campbell, who was due to appear on charges of using a document for pecuniary advantage, forced him to remain in his chambers.

The public gallery was packed with people, some even having to sit on the floor. One protester was waving a flag and Judge Roberts, through police, requested the flag be removed but the protester refused.

About six police and court security officers entered the courtroom at 10.15am to ask the protester to remove the flag a final time but he refused, and court officers including media were escorted from the courtroom.

Campbell could be heard in the cells screaming, prompting supporters to call out to her.

Campbell was taken from the courthouse in a police vehicle and the protesters held an impromptu hui outside the court.