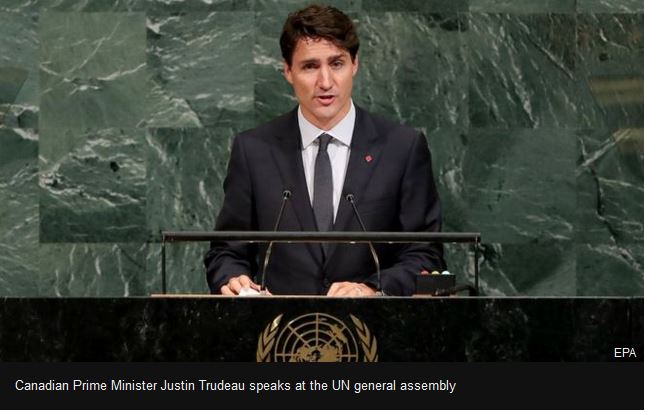 He said the country’s legacy of colonialism and its lasting impact on First Nations Canadians was one of “humiliation, neglect and abuse” .

But he has faced criticism over his handling of indigenous affairs.

The prime minister used his 30 minutes on Thursday at the General Assembly to reaffirm his commitment to reconciliation.

“Canada is not a wonderland where the difficulties others face do not exist,” Mr Trudeau said. “Canada is a work in progress.”

He highlighted the unsafe drinking water on many First Nation reserves and the gaps in education and health between aboriginal and non-aboriginal Canadians.

His government has vowed to end the boil-water advisories on First Nations reserves by 2020, but has yet to make a major dent.

The Trudeau Liberals have faced criticism from some indigenous groups for green-lighting pipeline projects.

The national inquiry into missing and murdered indigenous women in Canada has seen frustrated victims’ families and high-profile resignations.

In an August cabinet reshuffle, Mr Trudeau split the indigenous affairs portfolio between two ministers. It was a first step towards a major restructuring of the federal department of indigenous and northern affairs – a focal point in the government’s relationship with indigenous people.

“Though this path is uncharted, I am confident that we will reach a place of reconciliation,” Mr Trudeau told the UN.

His second address and its focus on domestic issues stood in sharp contrast to his UN speech in 2016, where he promoted Canada’s re-engagement with the international community, declaring “we’re Canadian and we’re here to help”.

There are about 1.4 million indigenous people in Canada.