Good morning (or good night as the case may be!) to everyone!!

My Skype is flooded, and now not updating again. My email account is overflowing- I’m almost a week behind again, sorry folks- have patience, I’m trying to wade through them all! To try and make things marginally easier for me, I’m posting this update here to try and answer as many questions as possible, and perhaps even C&P some of my skype conversations as well.

First off, the biggest question everyone is asking over and over:

“Are the documents/templates done yet!!???”

Right off the top I want to apologize to everyone for my own actions. I pushed Heather to put a “date” on the launch of the docs/templates. I really pushed her to have them ready for Monday’s show, then Tuesdays show… and I KNEW better than to set a solid date even when I was pushing for one. That is my fault and I take full responsibility for setting a public deadline that has passed and gotten a whole lot of people upset and angry. On the TCI show this past Tuesday I spoke about the documents and said that they are close to being finished- and at THAT point they were. My biggest mistake was assuming that it was a static situation and not mutable- and again, I know better than that- so again, I’ll step up and take full responsibility for making misleading statements without thinking of the repercussions to the people listening, who are NOT here and aware of all that is going on.

When I spoke on the TCI show, the documents, as they stood at that moment, WERE almost done. As I said on the show that night, we were also experiencing some serious energetic issues….. and believe me when I say that I was downplaying the situation. We had a lot of energetic help from several people and groups and the one big issue was resolved (I will talk about that in a bit), and when it did resolve, the energetics changed and allowed transparency and data to come out in a way that was loud & clear. New data and transparency means that the documents had to change to reflect that new data.

I want to explain something to everyone about this. These documents have to be PERFECT. Do you completely understand that? There can be no fact, no data, no piece missing from these documents. If a single piece of data is missing, or a facet of the situation is over looked, then the documents will not work. Get it? I don’t mean to be pissy, but I’m a little bit frustrated at the people out there screaming for the documents without actually understanding what is involved, nor the vastness of project that Heather is pulling together. I accept my responsibility in building up a “deadline” that was made public, but I DO ask that people take a moment to think.

….if this was the government putting this magnitude of a project together, it would take 15 years, 12 different committees and probably 5 trillion dollars to do.

……. we are one group of people, we have families that need us, we have no budget, no nannies, no house keepers, no drivers, no school teachers, no medics, no referees, no secretaries, no personal assistants…. We have a Heather, with the financial and legal know-how and years of experience within the legal and global financial community, and the ability to pull down the necessary data when it’s available and becomes clear. We have a me, who supports Heather in any way possible, from looking after her kids, doing her dishes occasionally, and who plays straightman to help her pull out the data she needs to write these documents and do her work. We have spouses who help us with kids and housework. We have friends like Nicole who also helps us rally the kids. We have the help of the bridge crew (also known as the Ethiopian 11 team, lol), and many many others energetically, who bring us information and help out energetically where ever possible…. but the reality is that we are all supporting Heather to do this work, because she’s the only one DOing it.

………… Mama D’s straight talk: not to be too bitchy, but if you think you can write these documents faster, have at it.

Heather spent about 10 hours yesterday, out of the house, solidly working on the documents. I just spoke with her about 30 minutes ago and she said she’s very very please with what she accomplished yesterday, and that they just need some final refining. I will add that as of 30 minutes ago, they just need some refining…. 10 minutes from now another factor might be made transparent and have to be entered into the documents. Regardless, they are in the works and will be released the very moment that they are fully and completely ready to go out. Then Heather (and I) will use them ourselves to make transparent how they work.

Project XIII- The I UV INchange doesn’t NOT require Project XIII to be up and running to access their Value. Caleb is currently working out a few small bugs in the system before launching. Again we have a situation where people pushed Caleb into giving deadlines- deadlines that didn’t’ take into consideration issues with Microsoft and the iStore, and the bugs that were discovered in the programming. And again, like the Documents that Heather is working on, Project XIII needs to be PERFECT when it’s launched. It is far too important to be put out publicly when there are issues that still need to be resolved. Caleb and his team are working at top speed to get everything sorted, but there will be no more “deadlines” given! Caleb will launch his ground breaking work WHEN it’s ready, and when it’s READY, it will be safe and completely secure.

As I said earlier this week, Heather has (with much help) gain access to her gmail account. This email account contains over 8000 emails and documents and to be honest is staggering in it’s scope and importance- if only to show what was and how much of what you’ve seen has come to be. I am currently looking at ways to INSURE that the information gets to the public Without tampering, without pieces conveniently going missing etc… As soon as I have it worked out, I will let everyone know how it will happen.

NOW… the other thing I wanted to update everyone on is the RV situation. Two things to start:

“The trade programs in and of themselves are perfectly legal, and are sanctioned by the SEC. However we believe because of all the delays and stupid excuses, that the BIG bankers are in cahoots with the UST using the RV funds in a way to stuff their pockets with TONS of dough.”

….the trade programs are “legal” in the old system of “legal” meaning that you can steal everything between 5:01pm and 8:59am without permission of the account holders …. as long as you don’t’ get caught- and even then, they’re only held accountable IF your lawyer is better than theirs.

I just love that all of a sudden everyone’s talking about the night time trading thefts that have been going on for MONTHS…. when I’ve been telling people this since at least APRIL!!!!! (facepalm) …..

I’m going to say this, and there will be a bunch of people who will snort and point fingers and make fun of me and will rant and rave that it’s all a crock of shit….

This is my OPINION, but we’ll see how accurate it is as everything plays out. There is a very good reason why the “RV” hasn’t gone yet: Heather hasn’t released the I UV INchange documents. I’ve watched the intel world go completely insane over the past two weeks about the Global Currency Revaluation. More than any other time that I’ve witnessed, they have been ramping up the “release” every night since June 25th. That is a relevant date because on that day certain information was spoken openly on skype to insure that our lovely NSA/Alphabet listeners heard every word and KNEW exactly what the plan was and how it was to play out. Two days later, with almost no notice, Iraq is suddenly released from Chapter 7 sanctions by the UN, with a unanimous vote. At that point everyone is told “It’s going tonight!!” and then nothing. Why? because on Thursday we released info about the Documents and Templates. Then on Saturday I wrote that the Docs and templates would be released in time for the radio shows. Again, the RV was “guaranteed” to happen on Monday…. then Tuesday….. then Wednesday…..

People who’ve been in the RV game for years will snort and say “that’s nothing different than what we’ve heard before….” except that certain things were put into play during those days that haven’t happened before.

We’ll just have to watch it play out, won’t we?

The one last thing I want to say is that everything is working on an energetic level right now, and those levels are vastly important.

“…. This isn’t about Politics & Finance any more. It’s about the energetics. “They” know that. Hence they attempted to keep us busy and off guard for a few days…”

When they couldn’t do anything to physically interfere with our work (which was made very very clear when we were in the desert), they had to ramp up the energetic angst. It definitely delayed things…. BUT in those delays came clarity and absolute data and transparency, which was necessary to move forward…. so the reality is that for all their meddling with people (mentally, emotionally, and physically), all the crashing glasses, the exploding jars, the blown fuses, the smoking electrical outlets, the watchers maneuvering frequencies at us….The work is still getting done.

A HUGE Thank You to everyone out there that has been helping us with the energetic clearing going on. The “watcher” has suddenly decided to go on vacation…. teeheehee. Thanx ladies!
I leave you with this picture and note that arrived this morning in my email:

D., I thought this lighthouse might serve as a good visualization of Heather standing firm,
in her efforts to lead the charge in our behalf in repurposing the banks. Go, Heather, go!

You shall prevail, for nothing is stronger than an idea whose time has come!… 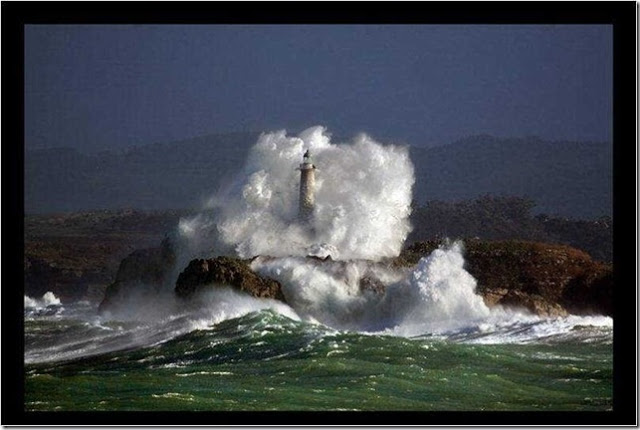 11 Comments to “ July 7th Update: Getting it all Perfect”