Julian Assange Cleared Of All Charges, Trump Set To Pardon

Julian Assange Cleared Of All Charges, Trump Set To Pardon 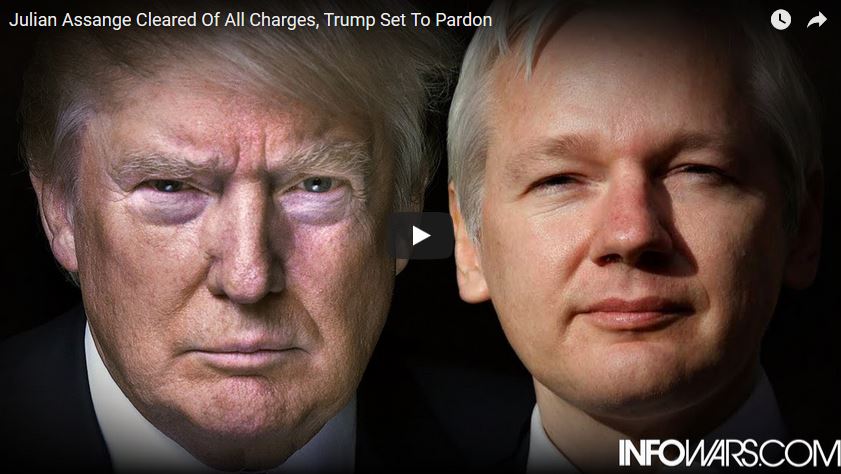 WASHINGTON, D.C. – In the past few days, a series of unexpected developments have cleared the path for WikiLeaks founder Julian Assange to leave the Ecuadorian Embassy in London without fear of arrest.

On Tuesday, WikiLeaks posted a tweet announcing the U.S. government had ended its eight-year-long grand jury proceedings against WikiLeaks that was expanded in 2017 to cover the WikiLeaks various “Vault” releases on CIA spy technology.

The WikiLeaks tweet referenced a State Department press conference held that day, Jan. 2, 2018, in which State Department Spokesperson Heather Nauert made a strong statement regarding freedom of speech that was couched in a reference to Iran. 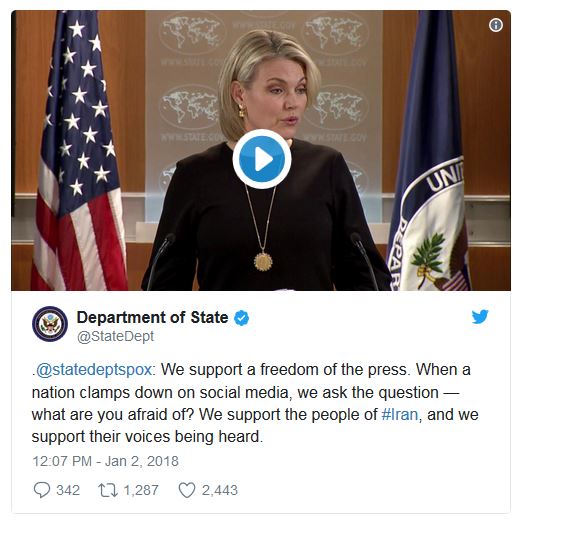 The WikiLeaks tweet confirmed the State Department’s reference to freedom of speech in Iran was a coded communication intended to extend the umbrella of free speech and press rights to WikiLeaks in a clear reversal of the policy in which both CIA Director Mike Pompeo and Attorney General Sessions have argued that arresting Julian Assange is a priority. It is not clear that Assange has violated national security laws, even if it can be shown he published U.S. national security classified documents.

In a motion filed with the U.S. District Court for the District of Columbia on Dec. 29, 2017, in the case Roy Cockrum vs. Donald J. Trump for President, Trump’s attorneys argued that Julian Assange had a right under the First Amendment to publish the DNC and John Podesta emails, even if the emails were stolen.

The case was orchestrated by Project Democracy, a group run by former attorneys from the Obama administration, arguing that then former Trump campaign adviser Roger Stone had conspired with the Russians to publish the DNC and Podesta emails.

In a 32-page motion defending the Trump Campaign, Michael A. Carvin of the Jones Day law firm and attorney of record representing President Trump, argued that the Trump campaign, and by inference Julian Assange at WikiLeaks, could not be held liable under the First Amendment for a disclosure of stolen information if the information published involves “a matter of public interest” and the speaker was not “involved” in the theft.

Technically, Assange has not yet been indicted of any criminal offense in the United States, nor is it clear if he committed any crime.  Under the Supreme Court Decisions New York Times v. Sullivan, 376 U.S. 254 (1964), and in the Pentagon Papers case, New York Times v. U.S. 403 U.S. 713 (1971), a journalist is allowed to accept and publish classified documents provided by other sources.

While Roger Stone’s case is still pending in the District of Columbia District Court, the opinion submitted by President Trump’s attorneys can be seen to have established the basis for pardoning Assange as a pre-condition of allowing Assange to leave the Ecuadorian Embassy in London without U.S. federal authorities seeking to arrest him.

In May 2017, the government in Sweden dropped the rape case against Assange, ending the four-year long attempt by the Swedish government to arrest Assange via a European Arrest Warrant.

A recent decision by a United Kingdom tribunal also appears to have vitiated the arrest warrant issued by a British court in 2012, after Assange violated his bail conditions to take refuge in the Ecuadorean Embassy.

On Dec. 29, 2017, Assange posted a tweet that referenced an article published by the Guardian on Dec. 14, 2017, citing a United Kingdom tribunal that declared WikiLeaks to be a media organization and a free speech advocate – designations that could carry a legal importance in placing Assange under “free speech” protections both in the UK and in the United States. 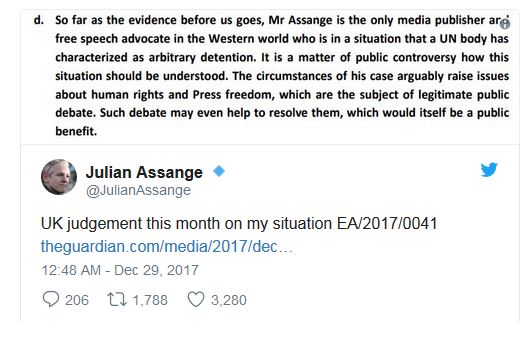 A QAnon post on the Internet bulletin board 8chan on Christmas Day and a series of messages posted on Twitter by Julian Assange on New Year’s Day appear to deliver a coordinated message that an extradition for Assange from his sanctuary in the Ecuadorian Embassy in London is imminent.

While interpreting posts intended to be cryptic is not a science, those following QAnon understand QAnon has forecast several important developments in code, in an effort to mobilize Internet-aware Trump loyalists.

Ultimately, the question QAnon is raising is this: Will President Trump pardon Julian Assange?

On Jan. 1, 2018, Infowars.com posted on Scribd.com a decoding of this cryptic QAnon Christmas Day post.

On New Year’s Eve, Julian Assange posted on Twitter a cryptic string of numbers that appear to be a “Dead Man’s Switch,” linking possibly to a new cache of WikiLeaks documents Assange’s associates would post should Assange be arrested. 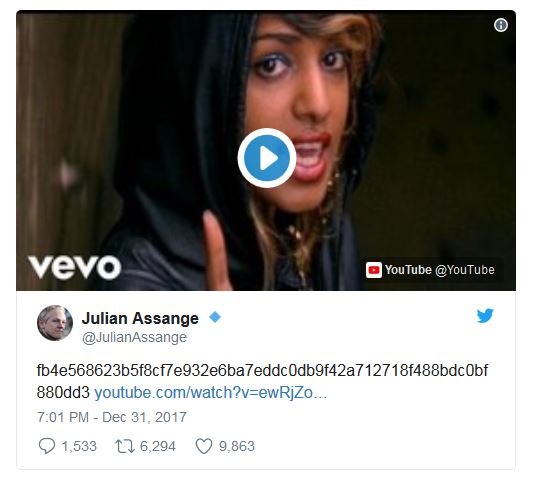 Again, in what appears to have been a synchronized post, @kill_rogue retweeted Assange’s New Year’s Day post and asked, “What words do you hear in the song?”

The second line of the lyrics in the song reads, “If you catch me at the border I got visas in my name …”