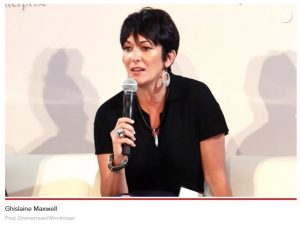 A federal judge Thursday unsealed a trove of records related to the sex life of longtime Jeffrey Epstein associate Ghislaine Maxwell — but quickly granted her legal team a stay on the release so they can appeal.

After Judge Loretta Preska delivered the ruling via video hearing in the case, she granted Maxwell’s lawyer Lauren Menninger one week to file an emergency motion with the Second Circuit Court of Appeals to challenge the decision.

Maxwell, who has been fighting the release, was not on the call.

“The court finds that any minor embarrassment or annoyance resulting from the disclosure of Miss Maxwell’s mostly non-testimony about behavior that has been widely reported in the press is far outweighed by the presumption of public access,” Preska stated during the hearing.

The secret documents relate to a seven-hour, 418-page deposition Maxwell gave as part of a now-settled defamation lawsuit filed against her in 2015 by Virginia Giuffre and to emails between Maxwell and Epstein.

Giuffre sued the British socialite for defamation after Maxwell publicly stated that Giuffre had made up the sexual abuse allegations against her and Epstein.

The former “sex slave” has been one of Epstein’s most vocal accusers and has claimed that Maxwell forced her to have sex with Prince Andrew, one of Epstein’s close pals. The disgraced royal has denied the allegations.

Maxwell, Epstein’s former lover, has been accused of recruiting teen girls for the pedophile — including Giuffre when she was 16.

She was arrested July 2 on a six-count federal indictment charging her with grooming three underage girls to be sexually abused by her and Epstein. She’s being held without bail at the Metropolitan Detention Center.

On Aug. 9, 2019, a federal appeals court unsealed 2,000 pages of documents related to the Guiffre-Maxwell defamation case. The next day, Epstein committed suicide in his jail cell while awaiting trial on sex-trafficking charges.