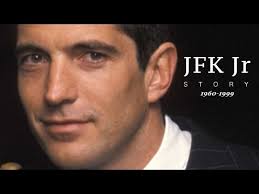 John Fitzgerald Kennedy Jr. (November 25, 1960 – July 16, 1999), often referred to as JFK Jr. or John-John in the press, was an American lawyer, journalist, and magazine publisher. He was the only surviving son of U.S. President John F. Kennedy and First Lady Jacqueline Bouvier Kennedy, and younger brother of Caroline Kennedy. His father was assassinated just before his third birthday.