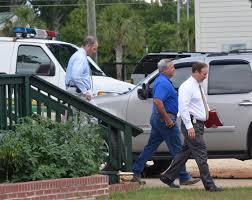 “People have not been able to go to a Fiscal Court Meeting without being bullied, thrown out of a meeting,” said Peyman.

Peyman says the arrests follow an audit of the year ending June 30, 2011, and he says it deals with unaccounted for money.

“What it appears, what is coming back now is the rich getting richer, poor getting poorer,” said Peyman.

“Have no idea what is going on,” Smith said as he was led out of the judicial center in handcuffs.

Neither Smith nor Sallee had any comment. Both were loaded into Peyman’s black Mustang, which he says is the only vehicle the fiscal court has allocated for him to drive.

“They came in and stripped my budget. Took everything from me. Left me with my mustang. Couldn’t take that because it is a forfeiture,” Peyman said of the car missing a bumper and part of its fender, and with no clear signs it is a police cruiser.

The arrests of the officials did not sit well with some and some didn’t like the fact that news media was there to cover it.

“If this gets on the news…you’re hurting. Get out of here!” said one man to reporters.

Others welcomed the arrests with open arms.

“I think Jackson County is now a free county. We’ve been under a dictatorship for several years now,” said Geraldo Serrano, who referred to himself as a concerned citizen who has attended several county government meetings in recent months.

Both Smith and Sallee face abuse of public trust, engaging in organized crime including extortion or coercion, tampering with public records, forgery in the second degree, falsifying business records and criminal facilitation.