By David Nakamura and Lisa Rein, published on the Washington Post, on December 22, 2017 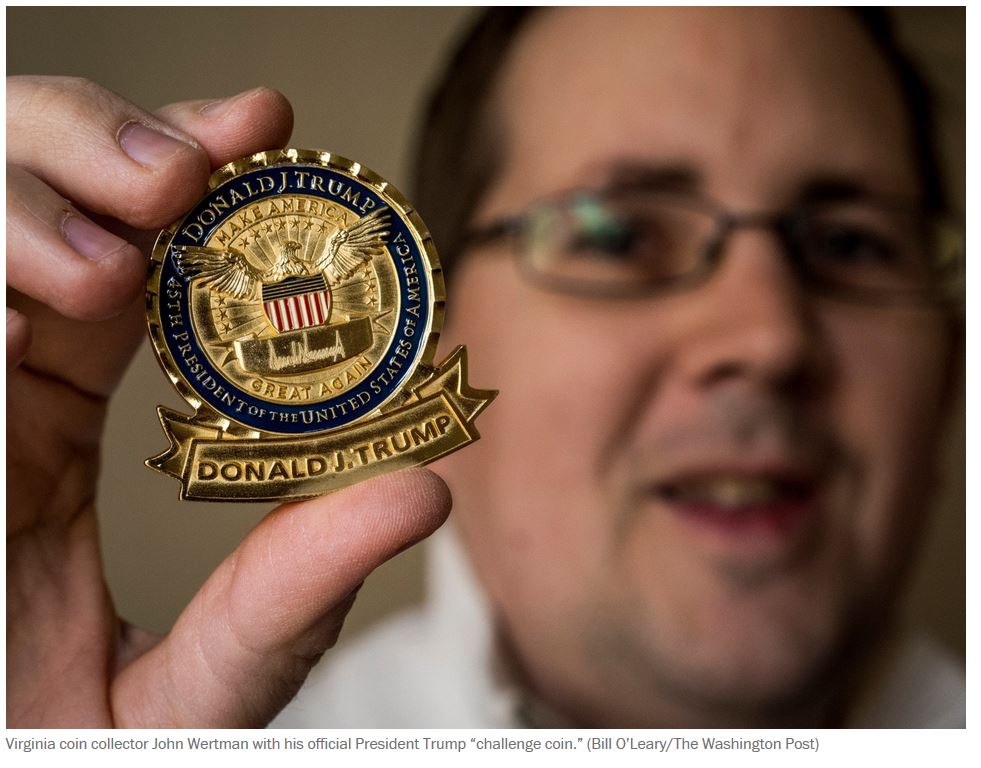 For two decades, the commander in chief has doled out distinguished-looking coins as personal mementos. Now, the presidential “challenge coin” has undergone a Trumpian transformation.

The presidential seal has been replaced by an eagle bearing President Trump’s signature. The eagle’s head faces right, not left, as on the seal. The 13 arrows representing the original states have disappeared. And the national motto, “E pluribus unum” — a Latin phrase that means “Out of many, one” — is gone.

The changes don’t stop there. In addition to his signature, Trump’s name appears three times on the coin, which is thicker than those made for past presidents. And forget the traditional subdued silver and copper: Trump’s coin, a White House aide marveled, is “very gold.”

The aide said the president, whose real estate properties are known for their gilded displays of wealth and status, was personally involved in redesigning the coin. Trump, who also had a hand in creating his famous red campaign hat, “wanted to weigh in on it,” the aide said. “It’s beautifully made.”

The White House offered conflicting accounts of which funds were used to purchase the coins, with one aide saying they were paid for by the White House and a second aide later saying that the Republican National Committee is covering the expense. An RNC spokeswoman confirmed Friday afternoon that the party is paying for the coins.

“They’re going to be used in ways they haven’t been in the past,” said the second White House aide, adding that they may be distributed at campaign rallies and to donors. Aides were not authorized to comment on the record and spoke on the condition of anonymity.

White House officials declined to say how much the coins cost or who designed them. 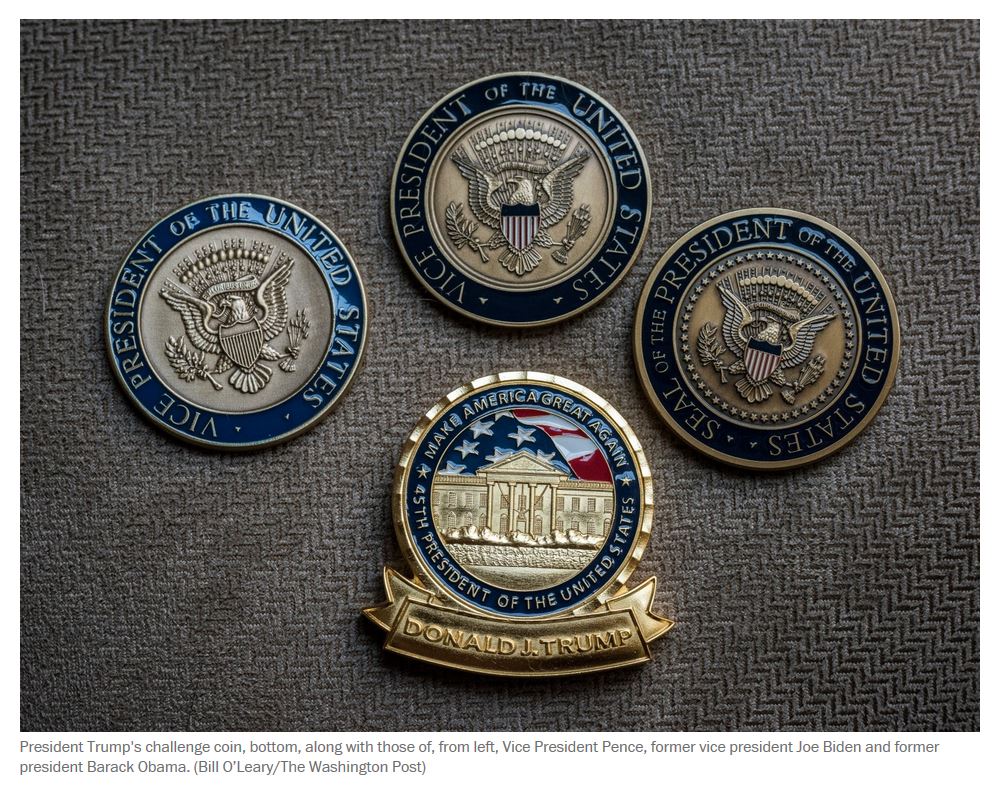 Some ethics experts questioned the unprecedented decision to include a campaign slogan on the coins, which are often distributed to members of the military.

“For the commander in chief to give a political token with a campaign slogan on it to military officers would violate the important principle of separating the military from politics, as well as diminishing the tradition of the coin,” said Trevor Potter, a Republican former chairman of the Federal Election Commission.

Aides said the coin reflects a president determined to make good on his promises to the American public. Asked why the campaign slogan was included, a White House aide replied: “That’s central to the message. I’m sure there will not be just one coin during his tenure. I’m sure the next one will say ‘Made America Great Again.’ ”

Challenge coins got their start as military baubles bearing division insignia and presented by officers to troops for exemplary service. The moniker came from a tradition in which service members challenged one another to produce their coins. Those who did not have one had to buy a round of drinks.

Presidents Bill Clinton, George W. Bush and Barack Obama have pressed the discs, slightly larger than a silver dollar, into the palms of officers and troops. Bush was said to place them on graves at Arlington National Cemetery.

The coins are hotly sought by collectors. Online, the official Obama challenge coin was being sold Friday for as much as $999.

Collectors often display the coins in a glass case or laid flat under a glass coffee table. But Trump’s coin, nearly twice as thick as those of his White House forbears, is designed to literally stand on its own. It features a gold-plated, ribbon-shaped banner bearing his name in capital letters — DONALD J. TRUMP — that doubles as a rocking-horse-style base. 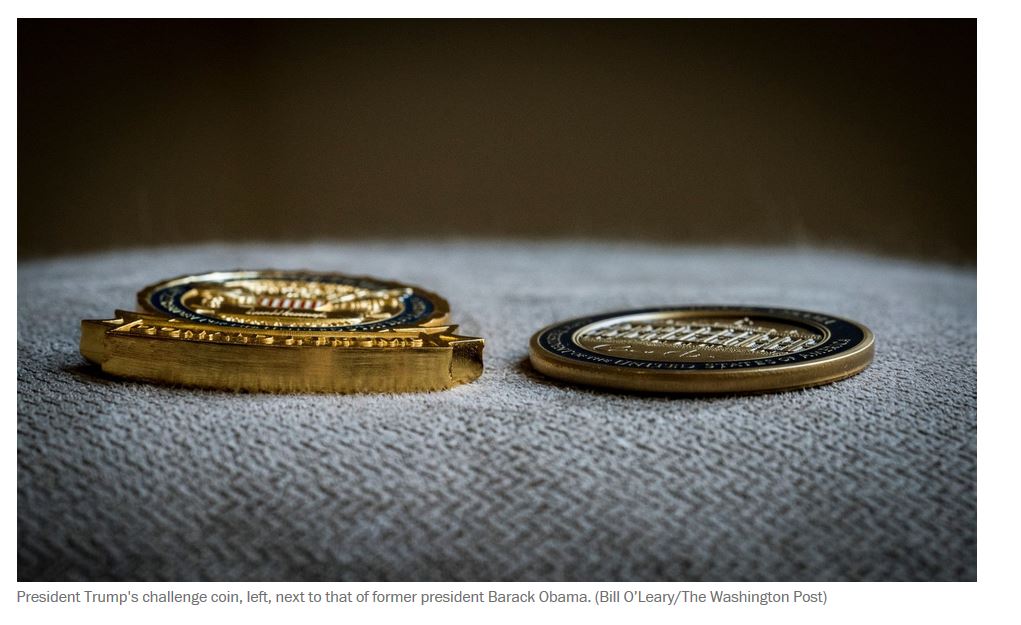 “It’s definitely not a standard coin,” said John Wertman, a collector of federal challenge coins who served as special assistant to the director of presidential letters and messages in the Clinton White House. He was among the first to get Trump’s coin, having received one in the mail at his Northern Virginia home after sending a letter of request to the White House.

“I’m assuming the gold appeals directly to Trump,” said Wertman, whose collection include coins from Obama and numerous former Cabinet secretaries. “He has a certain way he projects himself.”

Trump personally trademarked the phrase “Make America Great Again” in 2012. His campaign then filed for the rights to the slogan in 2015 when he launched his presidential bid.

The motto is featured prominently in his campaign materials but has also been used in official White House statements.

Nonpresidential challenge coins have become popular among emergency first-responders, including police and fire departments, as well as some federal government agencies. The cost varies depending on their size, colors and design, but experts said coins usually range from $3 to $10 each. 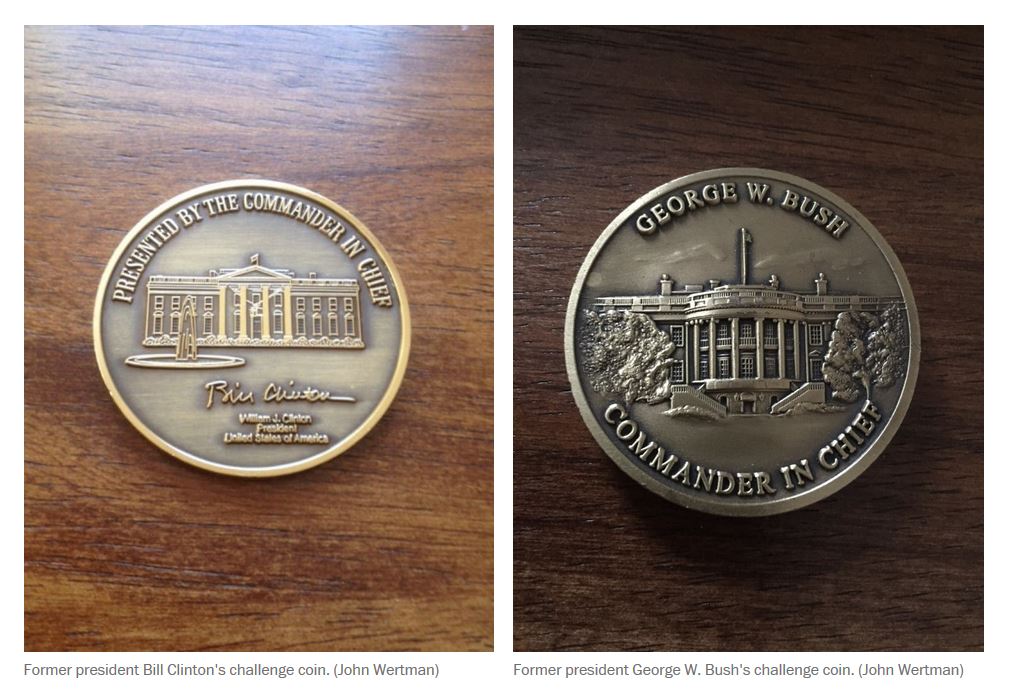 Aides said Trump grew to appreciate the custom during his campaign, when military officials or other dignitaries presented coins to him.

Trump “is a big proponent of military first-responders, police and sheriffs,” said former press secretary Sean Spicer. “When he met with them, some of them would give him coins.”

After entering the White House, Trump asked aides to have the coins he received be displayed in the Oval Office, where a case is positioned behind the Resolute desk. Another case of coins is in the president’s library, aides said. (In Clinton’s official White House portrait, he is portrayed standing in front of his challenge-coin display.)

As in past administrations, Trump’s Cabinet has gotten into the act, including Interior Secretary Ryan Zinke, who has a coin with his name on it.

Spicer had one of his own featuring a lectern on the back. A longtime Navy reservist, he has amassed a collection of about 150 coins, including one presented to him from Bush at the White House when he was promoted to commander.

Spicer estimated he ordered several hundred of his own coins, paying for them personally. He said he recently gave one to a pilot on a commercial flight who had served in the Air Force.

“If you get it, you understand the importance of it,” Spicer said.

Not everyone in the Trump administration has followed the boss’s lead, however. Among those who do not have their own challenge coins is Defense Secretary Jim Mattis, a retired Marine Corps general.

Asked why not, a spokeswoman replied: “It’s not about him. It’s about the person whose hand he is shaking.”