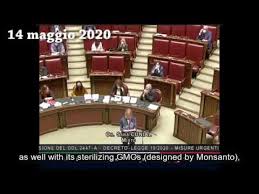 Please subscribe to the channel -Your Radio LIVE
Italian politician Sara Cunial accuses Bill Gates and the corrupt parliament.
It is perhaps the most difficult intervention, for Sara Cunial, that of today in Parliament: in just 7 minutes she manages to bring to the bar all, but all the most untouchable names in the direction of the almighty who govern our destiny. From Bill Gates to George Soros, from the evocation of Davos to the final attack on Giuseppe Conte (whom Cunial asks no less than to drag the philanthropist mogul before the Criminal Court) there is nothing and no one to save himself from his deadly sinkings. An intervention that arouses the furious reaction of that part of Parliament, closer to the elite than to the voters, that addresses her screams and offenses, but that she endures with stoic heroism, ending the meeting standing, in proud representation of the Italian people, even of that part that still does not know it has to thank her.