Is This a Huge Million-Year-Old, Man-Made Underground Complex?

Is This a Huge Million-Year-Old, Man-Made Underground Complex?

By Tara MacIsaac, published on Epoch Times, on February 25, 2016 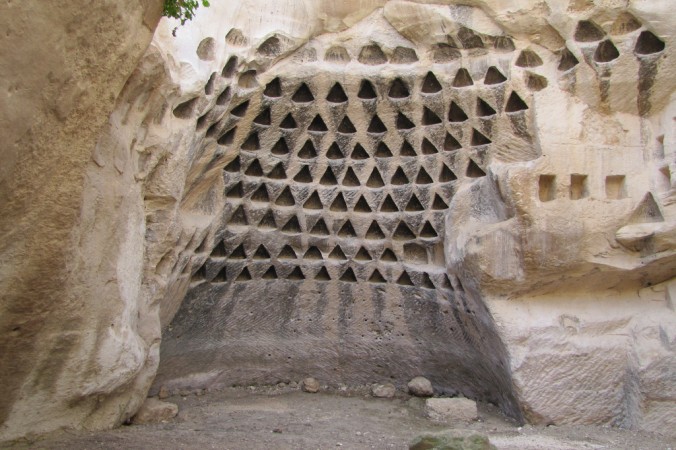 Hirbat Midras, in Adullam Grove Nature Reserve in Israel, part of what geologist Dr. Alexander Koltypin hypothesizes to be a massive complex
of prehistoric underground structures stretching across the Mediterranean. (Courtesy of Alexander Koltypin)

In Beyond Science, Epoch Times explores research and accounts related to phenomena and theories that challenge our current knowledge. We delve into ideas that stimulate the imagination and open up new possibilities. Share your thoughts with us on these sometimes controversial topics in the comments section below.

Most archaeologists and historians agree that human civilization only emerged some 10,000 to 12,000 years ago. Yet many researchers have drawn attention to artifacts and various other evidence of advanced civilizations long before this, even millions of years earlier.

Among them is Dr. Alexander Koltypin, a geologist and director of the Natural Science Research Center at Moscow’s International Independent University of Ecology and Politology.

Koltypin has analyzed ancient underground structures across the Mediterranean and identified similarities that lead him to believe the sites were once connected. Furthermore, the weathering of the structures, their material composition, and the geological features and historic changes in the region, lead him to believe they were built by an advanced civilization hundreds of thousands or millions of years ago.

Archaeologists working in the region usually date the sites by looking at the settlements located on them or nearby. But these settlements were simply built upon existing prehistoric structures, Koltypin said.

“When we examined the constructions … none of us never for a moment had a doubt that they are much older than the ruins of the Canaanite, Philistine, Hebraic, Roman, Byzantine, and other cities and settlements that are placed on it and around,” he wrote on his website.

He climbed a hill about 1,300 feet high near the Hurvat Burgin ruins in Adullam Grove Nature Reserve, central Israel. As he looked over the site, he recalled a similar feeling from when he had climbed to the top of the rock city Cavusin in Turkey.

“I was personally convinced once again … that all these rectangular indentations, man-made underground structures, and scattered debris of megaliths were one underground-terrestrial megalithic complex which was opened by erosion to a depth of several hundred meters.”

Not all parts of the purported complex are still underground. Some have come far above ground with geological shifts throughout history—the ancient rocky towns of Cappadocia in Turkey, for example, which Koltypin includes in the complex.

Some parts may also be found under the Mediterranean Sea, as is indicated by structures along the coast. 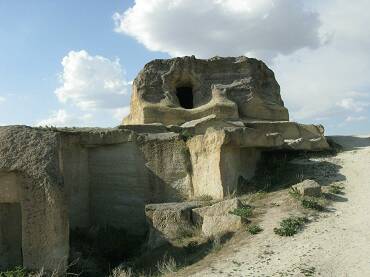 Cavusin village in the Cappadocia region of Turkey. (Courtesy of Alexander Koltypin)

In central and northern Israel and central Turkey, Koltypin estimates the sites were exposed after an erosive cut into the Earth of several hundred meters (more than 1,000 feet).

“According to my estimates, such depth of erosion … hardly could be formed in less time than 500,000 to 1 million years,” he wrote.

He hypothesizes that part of the complex was brought to the surface as a result of alpine orogeny (mountain-formation).

The composition of building materials at a site in Antalya, Turkey, which Koltypin calls the “Jernokleev site,” are also some 500,000 to 1 million years old by his estimate.

Archaeologists usually date the man-made structures at Jernokleev to the Middle Ages. But, Koltypin says the materials indicate a much older age. 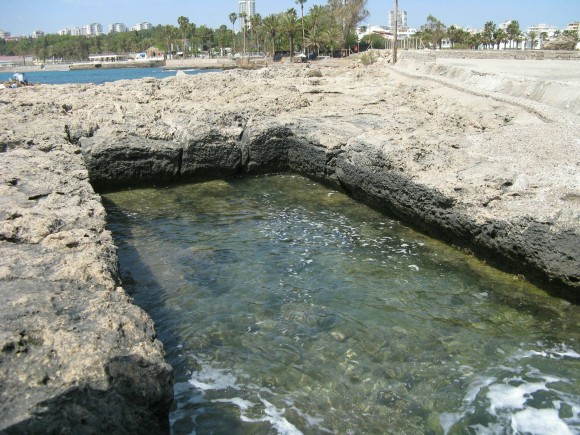 Such depth of erosion … hardly could be formed in less time than 500,000 to 1 million years.

What he identifies as a pink “cement” includes in it man-made ceramic fragments and basalts of volcanic origin among other materials. The last time an active volcano would have been present in the region to provide the basalts would have been some 500,000 to 1 million years ago.

As a result of the Earth’s crust moving over distant ages, parts of the underground complex have been plunged under sea level, Koltypin said. 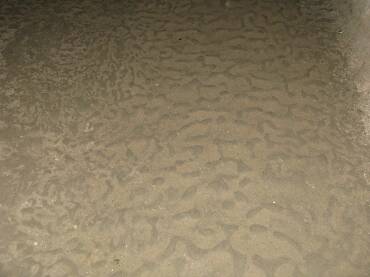 The floor of Derinkuyu, an underground city in Turkey. (Courtesy of Alexander Koltypin)

The similar megalithic ruins at the various sites are part of what led Koltypin to surmise a connection between the sites, united in a giant prehistoric complex.

Megalithic blocks weighing tens of tons seem to have at some point likely been attached directly to the underground constructions, he said. “This circumstance gave me a reason to call the underground structures and geographically related ruins of cyclopean walls and buildings as a single underground-terrestrial megalithic complex.” 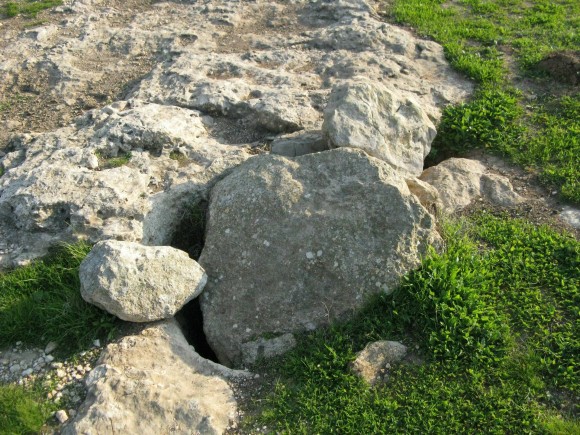 An entrance to the underground at Hurvat Burgin in Adullam Grove Nature Reserve in Israel. (Courtesy of Alexander Koltypin) 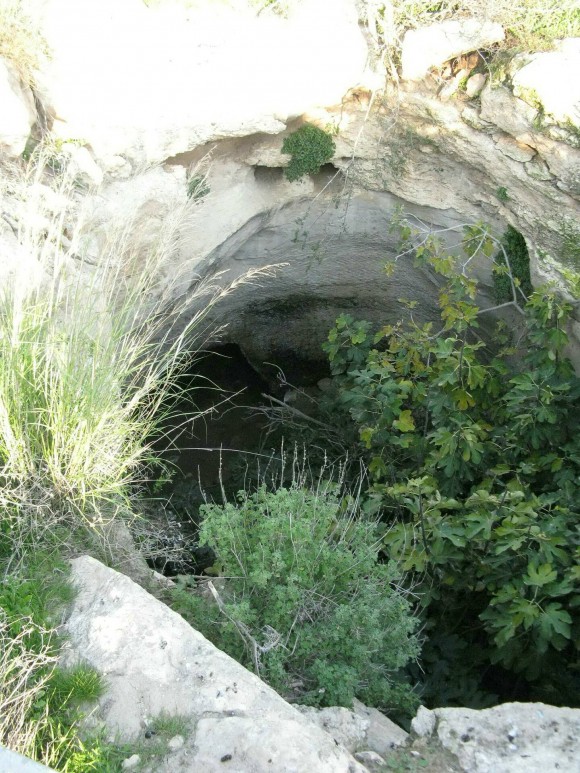 An entrance to the underground at Hurvat Burgin in Adullam Grove Nature Reserve in Israel. (Courtesy of Alexander Koltypin)

The megalithic constructions seem to surpass the technological capabilities of the civilizations conventionally thought to have built them, Koltypin said. For example, it remains a mystery how the 800-ton megaliths in Baalbek, Lebanon, were transported from a quarry to their present location. 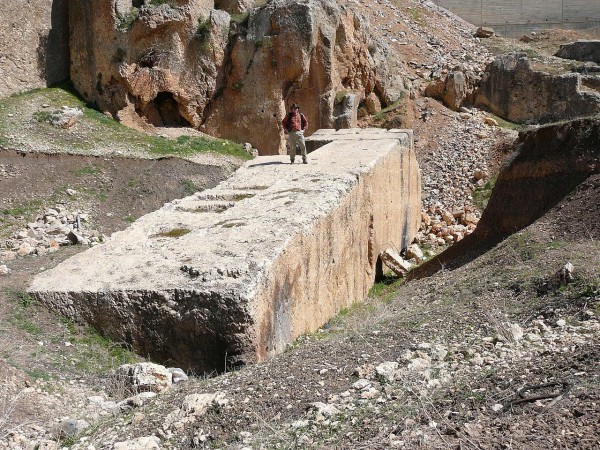 A megalith at Baalbek. (Wikimedia Commons)

The stones fit together perfectly in some parts without cement, and the ceilings, columns, arches, gates, and other elements seem beyond the work of men with chisels, Koltypin said. The chisel marks usually said to show they were built in more recent times occur only in some parts of the structures and seem to have been etched there long after the original structures were built, he said.

He noted that structures built on or near the sites by the Romans or other civilizations are comparatively primitive.

It is within a context of other findings suggesting advanced prehistoric civilizations that Koltypin puts forth his hypothesis. 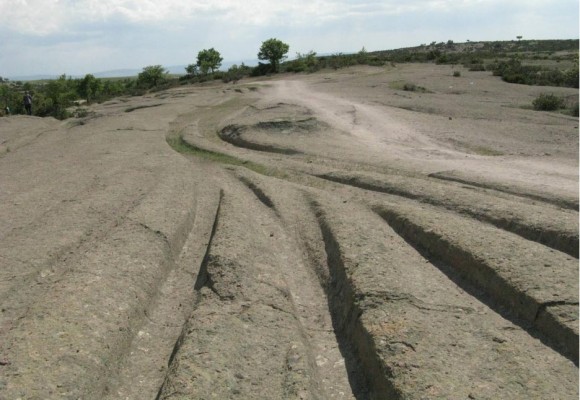 Mysterious ancient tracks dissect the landscape in the Phrygian Valley of Turkey. What is the truth about who made these tracks, and how? (Courtesy of Alexander Koltypin)

For example, he has studied ancient ruts that crisscross the Phrygian Valley of Turkey and inferred that they are tracks of “unknown antediluvian all-terrain vehicles” petrified in the stone from millions of years ago.