IS IT WEDNESDAY YET?

IS IT WEDNESDAY YET? 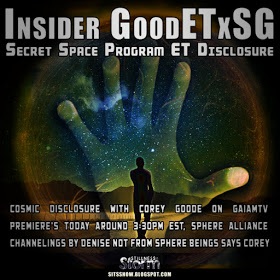 Justin informed me Corey Goode has gone on the attack on sweet Denise.  Why?   Do you ever get the feeling these guys like to control what’s being released information-wise?   I mean look at the logo itself… GOOD ET…. (even named himself “Goode”) and by definition the rest are BAD ET…. or perhaps bad blogger? Sorry its all ONE… its all just states of consciousness.   There are are awake beings and non-awake beings, and there are beings who operate in pure love, and those who’d rather talk about dark and light and good vs bad… the law of One…and why you can’t go from A to B… while oiling up the M16… because well… a hierarchy needs an enemy… as do book sales and TV shows… that’s the oldest trap in the book… DUALITY….  POLARITY… so how does that mindset get anyone out of the suffocating bubble of toxic ego the earth has been?

I am DONE with living in a contrived REALITY SHOW called CONVENTIONAL WISDOM complete with Kim Kardasian tossing midgets to Kanye West in while jello wrestling on I’ve Got Talent….   I JUST DO.  I DON’T NEED YOUR PERMISSION.

I have been told so many times what is impossible… But we did it anyway with no budgets, a volunteer crew, and every 3 letter agency, buzzing military copters in the ravines of Morocco and banker magician crews and cointelpro junkies dogging our ever step along the way… sure they can create havoc… and they did… sure got a few of my friends stirred up for a while but they’ll snap out of it eventually… and we still love them…  but you know… goes with the territory… Heather got a death threat recently from Swissindo delegate.  I had 3 threats 6 weeks ago, two of which came from supposedly Secret Societies “for the light”.  Light or Dark… same friggin’ coin using the same tactics. Like any of that is new?   I love you all for at LEAST DOING… even if misguided… and I love Corey Goode for sticking his neck out where many people did not…  Its all Goode… LOL!!!

I’ve had dragon bankers say Heather’s filings didn’t matter, and then had other bankers from the same Dragon lineage (cough… Swissindo and their God-Sky-Earth Kingdom… cough… “but we’re a good monarchy”….) claim parts of her filings were valid (the CVACs etc) but ignore the ones that said the the hierarchies are canceled.  Can’t be BOTH WAYS CAN IT?  And yet NONE of them can do an RV or Phoenix the banking systems no matter how many magical rituals they do at Mt Everest or Mt Blanc.  The Red Dragon’s should just be upfront and call themselves the Venture Capitalist Dragons. They are using the VC playbook.  Get ready for the “financing events”.

The families are running out of excuses as to why they are not delivering on their promises.  How does the same beings owning the BRICS and the IMF change ANYTHING? Hmmm???  Some things are just not supported in the new energies. Especially deception about terms of contracts and who owns what..  Can’t teach an old banker new tricks it seems… where is that template filing cabinet anyway?  Fuck some termites ate all our the “divine plan” templates!!!  Since when did expanded awareness need to come AFTER the god of mammon?  Don’t recall the good book putting things in that order!  ET’s can’t come before a new banking system is in place? Wanna bet?  We are ALL ETs… none of our DNA is native to this planet… and Gaia has been very patient… and even kind a likes us…

This blog has always been about the three legged stool of control.  Religion.  UFOs/ETs.  And banking.  The three subjects that are all taboo to challenge.    I was just called a heretic to the Sphere Alliance orthodoxy…  the very night the alps are FILLED with scout ships…  And that’s REALLY FUNNY!

I am not going to bash Corey, he released some information that needed to be released. I never even intended to get involved in the whole Sphere Alliance thing… but now I am, and I am going on the evidence I have, not all of which has been published.

I am already a heretic to the banking system, and I can’t spell ЯV.. I am now a heretic to UFO orthodoxy of the moment… and soon I might even be called a religious heretic like earlier in my life.   Perhaps sooner than anyone thinks….

But NOW I DO.  NOW I PROVE.   YOU DON’T NEED THE GOOD HOUSEKEEPING SEAL OF APPROVAL TO BE I AM!     STAY TUNED… MUCH MORE IS COMING! AND ITS ALL GOOD!!!

I LOVE YOU ALL.