Is Brazile Using a Spy Tactic Called “Limited Hangout” in Her Anti-Clinton Tirade?

Is Brazile Using a Spy Tactic Called “Limited Hangout” in Her Anti-Clinton Tirade?

By Cillian Zeal , published on  Concervative Tribune, on November 3, 2017 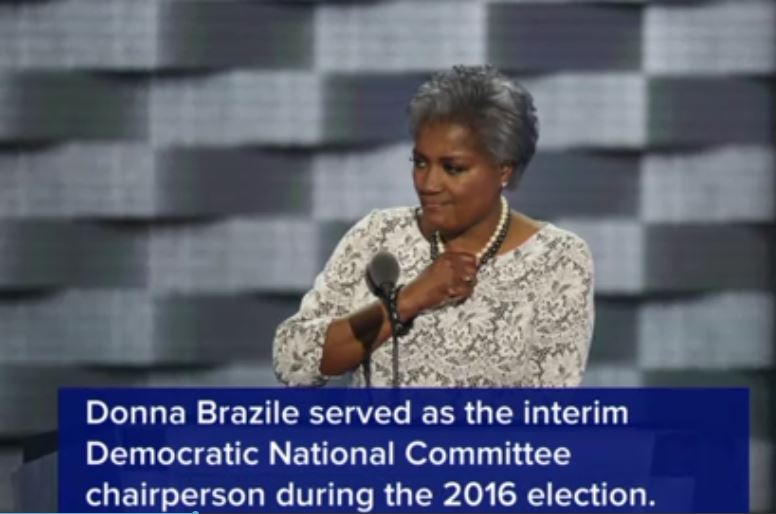 Donna Brazile is a brave, brave woman. This week, in an excerpt from her upcoming new book, she revealed what every single person who has been paying attention knew about the Democrat National Committee:

Namely, it was a financial clearinghouse for and a de facto arm of the Clinton campaign from day one, helping her clinch the nomination from her rumpled socialist rival.

Brazile, the interim DNC chair at the time of the election, was duly broken up about the whole kerfuffle: “Before I called Bernie Sanders, I lit a candle in my living room and put on some gospel music. I wanted to center myself for what I knew would be an emotional phone call.” No word (at least yet) on what was playing on the Sonos when she called Hillary to feed her debate questions. To my ears (and sundry Pitchfork-reading types), this was a major disappointment.

In the excerpt, Brazile talked about how she “followed the money” and found innumerable financial shenanigans designed to keep a debt-riddled party afloat during the 2016 election cycle, all while enriching Hillary Clinton’s campaign. Brazile detailed how Hillary began taking control of the DNC party apparatus — something usually only a nominee or presumptive nominee would traditionally do — as early as August of 2015, just after her candidacy began, and that her presidential campaign was siphoning off money from state parties, hindering their ability to compete in down-ballot races.

The whole thing was a shock — unless, of course, you’ve followed American politics in any real way, in which case you likely knew all this (sans the minor details) as early as last summer.

Alas, the media being what it is, Brazile’s report suddenly shoved Uranium One and Fusion GPS out of their limited, preallocated “bad stuff we’re obligated to report about the Democrats” slots:

Bernie Sanders fans and Democrat independents looked at the array of headlines and cable news coverage and were no doubt reminded of the obloquies and iniquities heaped upon them in a campaign that was already rigged against them. As for myself, I was reminded of an age-old spy tactic known as the “limited hangout.”

In March of 1973, it was becoming increasingly clear that the Watergate investigation was moving from a few small-time burglars and ex-CIA thugs to the environs of the executive manse. President Richard Nixon — along with administration officials John Ehrlichman, H.R. Haldeman and John Dean — created what one guesses passed for a brilliant scheme in the Nixon White House: They would have Dean write up a report where the administration would take some responsibility for the break-in at Democrat National Headquarters, but which would stop short of implicating anyone in the White House. Quoth Nixon’s Oval Office tapes:

The idea was that if some information were released making the administration look bad, the press would be so distracted they wouldn’t follow up on the more serious angle — namely, that people within the White House had authorized a break-in that the president had helped cover up.

The scheme ended up failing for reasons other than its problematic formulation: Dean, realizing he was being set up as a patsy through authorship of the report, decided it was high time to cooperate with federal investigators. However, the idea of the limited hangout lives on.

The limited hangout is described by a former CIA deputy director as “resort(ing) to admitting — sometimes even volunteering — some of the truth while still managing to withhold the key and damaging facts in the case. The public, however, is usually so intrigued by the new information that it never thinks to pursue the matter further.” (Emphasis mine)

And thus, we come back to Donna Brazille — and, more importantly, what the DNC might not want reporters to pursue.

Last week, The Washington Post revealed that the DNC, along with Hillary Clinton’s campaign, paid the firm Fusion GPS to assemble the so-called “Trump dossier,” a mostly unsubstantiated farrago of the future president’s dealings with anyone or anything Russian.

While the research that produced the dossier was originally funded by a conservative source — later revealed to be Michael Goldfarb, owner of the Washington Free Beacon — CNN national security analyst Michael Weiss reported that “the bankrolling of the intelligence firm’s investigation changed from one political party to another in April 2016, before Christopher Steele, a former British MI6 officer, was subcontracted by Fusion GPS to conduct a deep dive into the Eastern tilt of Trump’s financial and personal behavior.”

And so, a former British special agent went to Mother Russia and interviewed sources, no doubt in some way connected with Russian officialdom, to put together a now-ijnfamous opposition research document.

In an opinion piece published Tuesday by The Washington Post, columnist Marc A. Thiessen notes that by choosing Fusion GPS for opposition research into Trump’s Russian ties, the DNC actually has more proven ties to the Kremlin than anyone in the Trump administration does.

It all goes back to the Magnitsky Act, a series of sanctions on Russia mostly affecting a small group of oligarchs. The legislation was passed after Russian tax attorney named Sergey Magnitsky was detained and died in Russian government custody in 2009. When Bill Browder, the American-born owner of the firm that Magnitsky worked for, pushed for the legislation on Capitol Hill, he was the subject of a  smear campaign by Russia.

And who was behind that campaign? None other than Fusion GPS.

“The news that the Clinton campaign and the Democratic National Committee paid for research used in the discredited Trump-Russia ‘dossier’ is a bombshell,” Thiessen wrote. “But even more shocking — and overlooked — is the revelation that the firm the Clinton campaign hired to compile that dossier, Fusion GPS, is the same firm that has been accused in recent congressional testimony of launching a smear campaign in Washington against Sergei Magnitsky, the Russian lawyer who was tortured and killed in a Russian prison in 2009 after uncovering a $230 million tax theft by 23 Kremlin-linked companies and individuals close to President Vladimir Putin.”

Now, of course, it wasn’t just the Clinton campaign that hired Fusion GPS. The DNC is also involved. It’s also been established through CNN that it wasn’t until funding switched from Republican sources to the Democrats that Fusion GPS, through Steele, began to take a “deep dive into the Eastern tilt” of Trump’s business ties.

Now, the proper question to be asked here, if we had a Fourth Estate interested in the facts, is why the Clinton campaign and the DNC — who, if Brazile is to be believed, were pretty much one and the same as of April of 2016 — decided not only to do a “deep dive” into Russia’s finances but to use a Kremlin-linked organization to do it.

Now, Brazile’s book has been in the works for a while; one can only presume she was texting with a literary agent the moment she started seeing the Pennsylvania returns rolling in Nov. 8 last. However, the excerpt that was released in Politico — specifically, what exactly was excerpted — seems interesting to this observer.

The press has been all over this “stunning revelation,” which could have been ascertained by anyone who bothered to read the WikiLeaks emails last summer or the buried stories that surrounded them. Oh, and she also threw Hillary Clinton under the bus — which is hardly something new, since the Democrats have been busy throwing their former standard bearer under every arrival and departure from the Port Authority Terminal for quite some time now.

Aside from bean-counting details regarding the DNC’s finances, nothing in Brazile’s piece should come as a surprise to anyone who had been paying attention.

The press, apparently, hasn’t been paying attention; search Brazile’s name in Google News and you’ll give your trackpad a good workout from all the scrolling. The stories about the excerpt run well into the hundreds.

In other words, the mainstream media want Americans to think the fact that the DNC retained a smear-firm with ties to the Kremlin in order to pursue an investigation into then-candidate Trump — an investigation several people connected with the Hillary campaign and the DNC may have possibly lied to Congress about — is exponentially less important than Donna Brazile admitting something everyone in the free world who cared to know about it already knew.

And, as I stated previously, the media doesn’t allot too much time to deal with Democrat foibles. Between Jan, 20 and Oct. 20, nightly newscasts spent 1,000 minutes on Trump and Russia. By contrast, the major networks spent less time on the Uranium One scandal during that period than a lengthy commercial break might take on one evening of television.

The DNC is already in a precarious position. It’s hugely in debt, the party has suffered major electoral losses at every turn, and donors are wary of spending any more money on a losing horse. A collusion scandal that links the party to Vladimir Putin and his retinue of thugs would be the very last thing they need (save a scandal the American public might really pay attention to, like evidence Bill Clinton was sharing hotel rooms with Harvey Weinstein).

The media is barely talking about Fusion GPS’ Russian ties, however. In fact, when the White House even tried to bring some mention of it up, CNN’s Chris Cillizza — increasingly becoming an influential tastemaker in the media-political complex for reasons unknown to God and man — wrote a piece where the headline called such accusations a “massive exaggeration.”

That was written before Brazile’s tell-all. Then, at least, they were writing about the “massive exaggeration.” Now, hardly anything is being written about the Fusion GPS story at all.

Instead, they’re all abuzz regarding Donna Brazile and the DNC malfeasance she’s now chosen to focus on. That’s the same DNC malfeasance we’ve known about for more than a year, and which has no relevance to the current Russian investigation.

Brazile has always been a good soldier for the DNC, even if she’s no longer there. I don’t wish to ascribe motives to anyone, but I will say this: If Brazile wanted to pull off a limited hangout with this excerpt, she couldn’t have done it more deftly or with more apparent effect.