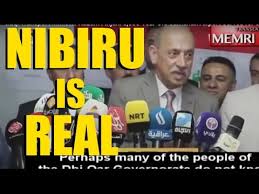 September 30, 2016: Iraq’s Transport Minister, Kazem Finjan, states “ancient aliens” built earth’s first airport 7,000 years ago in the Middle East – and used it for interplanetary missions. Sumerians inhabited what was Mesopotamia and, according to Finjan, were aided in developing this space station by visiting aliens (Anunnaki).

“The first airport that was established on planet earth was in this place. It was constructed 5,000 years before Christ,” Finjan told a baffled gallery of journalists.