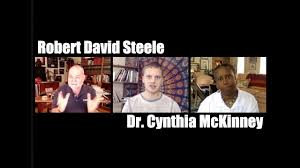 Robert David Steele is a former spy, father of the Open Source Intelligence movement, and recent nominee for the Nobel Peace Prize in recognition of his development of The Open Source Way that integrates holistic analytics, true cost economics, and Open Source Everything Engineering.

He is the founder of Earth Intelligence Network, a non-profit educational corporation, and the founder of #UNRIG, a civics education project focused on election reform. Find Mr. Steele at https://phibetaiota.net/

Cynthia Ann McKinney is the first black woman elected to Congress from Georgia, serving six terms. She was the Presidential nominee of the Green Party in 2008, and is recognized as both a national leader ​and international human rights activist who believes in justice for all and works against US regime change wars, state terrorism, and repression of those who dissent.