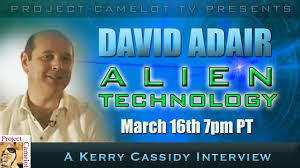 I interview David Adair. This is my first interview with David. We discuss his upcoming appearance at UFOCON in San Francisco and delve into his background in the world of black projects. Also, see my 2nd interview with David covering what happened at Area 51 on this channel!

This is a wide ranging discussion about alien technology, David’s inventions and rocketry as well as Antarctica, interstellar space travel and a possible CME from the sun.

Short bio: David Adair built a rocket with first strike capability at the age of 17, secretly funded by the U.S. Government. He was during that time, shown an alien engine at Area 51 with an engine design similar to his own rocket. He claims he was tortured by Arthur Rudolph and rescued by General Curtis LeMay.