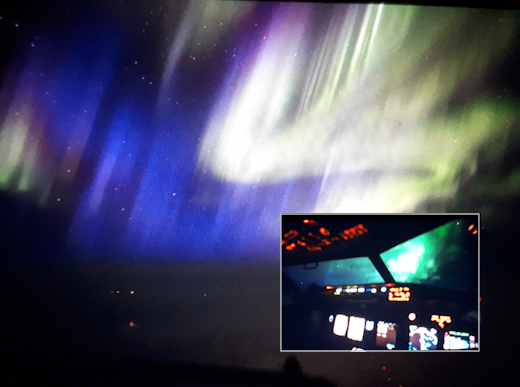 “I’ve been flying airplanes for 20 years and photographing aurora for 10 years, but I’ve never seen anything like this before,” reports pilot Matt Melnyk who photographed the display from 39,000 feet:

“Electric blue auroras!” he says. “This was while on a red eye flight from Edmonton to Toronto around 4 am over northern Manitoba. Unbelievable sky. I was able to grab some hasty shots with a cell phone.”

During the storm, Northern Lights spilled across the Canadian border into the United States as far south as Indiana. Hongming Zheng, a student at Purdue University, saw the blue glow just five miles from his dorm: 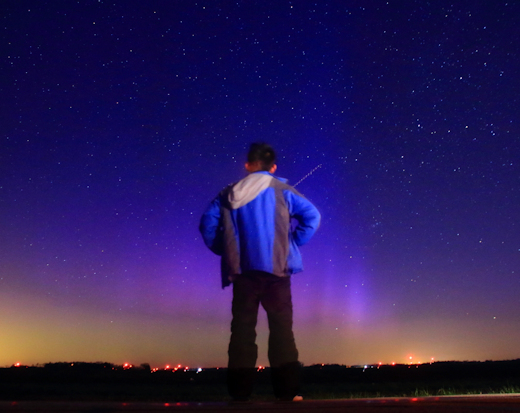 “I was preparing for bed at 1:32 am on April 20th when I read that there was an Interplanetary Shockwave,” says Zheng. “I immediately started driving north to see the show. A weak green wisp showed up at 2am and faded, but shortly after 5am a sudden outburst occurred. Purple pillars were easily visible to the naked eye. It’s funny how one minute you are in a humid dorm struggling to get the laundry door closed, and the next minute you are chasing one of the most spectacular phenomenon known to man.”

What is an interplanetary shock wave? It is a supersonic disturbance in the gaseous material of the solar wind. These waves are usually delivered by coronal mass ejections (CMEs). Indeed, this one might have been a minor CME that left the sun unrecognized earlier this week.

Alternately, it might have been an unusually sharp co-rotating interaction region (CIR). CIRs are transition zones between slow- and fast-moving streams of solar wind. They contain plasma density gradients and magnetic fields that often do a good job sparking auroras.

High latitude sky watchers should remain alert for auroras on April 20-21 as Earth’s magnetic field continues to reverberate from the impact.