HATJ, commented on the article when I sent it to her…

By Ivan Pentchoukov, published on The Epoch Times, on October 1, 2019 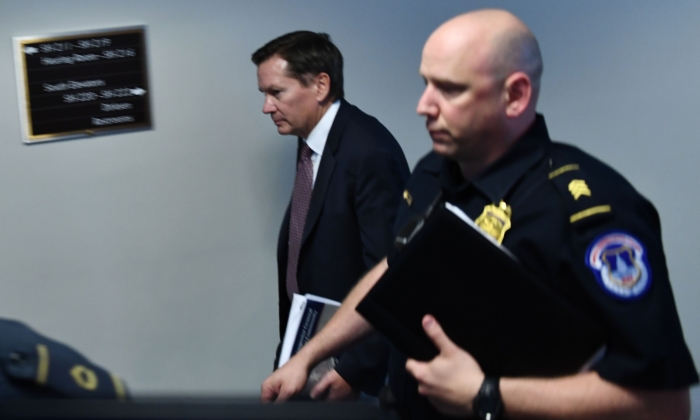 The Office of the Intelligence Community Inspector General (ICIG) admitted Sept. 30 that media scrutiny contributed to its decision to make a significant change to the whistleblower form tied to the complaint at the center of the presidential impeachment inquiry.

The ICIG issued a detailed statement addressing questions about why the office removed language from a whistleblower form that advises complainants that their requests wouldn’t be forwarded to Congress unless they provided firsthand information. The removal is significant because the whistleblower whose complaint triggered the impeachment inquiry provided only secondhand knowledge about the alleged conduct.

The ICIG stonewalled media inquiries about the change to the form for days, until Republican lawmakers on Sept. 30 issued a preservation order and demanded questions about the change. The watchdog statement specifically notes that “press inquiries” about the whistleblower complaint were part of the rationale for changing the form.

“In the process of reviewing and clarifying those forms, and in response to recent press inquiries regarding the instant whistleblower complaint, the ICIG understood that certain language in those forms and, more specifically, the informational materials accompanying the forms, could be read–incorrectly–as suggesting that whistleblowers must possess first-hand information in order to file an urgent concern complaint with the congressional intelligence committees.”

The whistleblower complaint claims that President Donald Trump asked Ukrainian President Volodymyr Zelensky in a July 25 call to look into allegations of misconduct by former Vice President Joe Biden and his son Hunter Biden. The whistleblower and congressional Democrats have interpreted the request as Trump abusing his office for political gain. The Department of Justice reviewed the allegations in the complaint and determined no further action is necessary.

On the call with Zelensky, Trump appeared to refer to a video in which Biden brags about forcing the firing of a Ukrainian prosecutor by withholding $1 billion in U.S. loans. At the time of the firing, the prosecutor was investigating Burisma, the Ukrainian natural gas firm that paid Hunter Biden $50,000 per month as a member of the board of directors. The prosecutor, Viktor Shokin, told a European court in a sworn affidavit that he was removed because he refused to drop the investigation.

The form features a section in the instructions entitled, “First Hand Information Required,” which advises complainants that “the ICIG must be in possession of reliable, first-hand information” in order to process the complaint, in accordance with the Intelligence Community Whistleblower Protection Act (ICWPA).

“If you think wrongdoing took place, but can provide nothing more than secondhand or unsubstantiated assertions, ICIG will not be able to process the complaint or information for submission as an ICWPA,” the old version of the form stated.

In its Sept. 30 statement, the ICIG explained that even though the form featured language prohibiting complaints featuring secondhand information, the law doesn’t have such a requirement. The ICIG didn’t respond to The Epoch Times when asked why the language, contrary to the statute, appeared on an official whistleblower form for 15 months. The office also didn’t respond when asked if a single form had been filed since May 24, 2018, in which the complainant provided only secondhand information.

The whistleblower who triggered the impeachment inquiry filed his or her complaint with the ICIG on Aug. 12. The complaint consists almost entirely of secondhand accounts, media reports, and other publicly available information. Trump and Republicans have focused on that point to cast doubt on the credibility of the whistleblower.

The ICIG clarified, in its Sept. 30 statement, that the office’s review determined that the whistleblower had “direct knowledge of certain alleged conduct.” The ICIG didn’t respond to a request to clarify which “alleged conduct” the statement refers to.

The ICIG declined to comment to The Epoch Times.