by Tyler Durden, published on Zero Hedge, on November 4, 2017

In a shocking development, Saudi press Al Mayadeen reported late on Saturday that prominent billionaire, member of the royal Saudi family, and one of the biggest shareholders of Citi, News Corp. and Twitter – not to mention frequent CNBC guest – Al-Waleed bin Talal, along with ten senior princes, and some 38 ministers, has been arrested for corruption and money laundering charges on orders from the new anti-corruption committee headed by Crown Prince Mohammed bin Salman, while Royal princes’ private planes have been grounded.

Among those fired and/or arrested are the head of National Royal Guards, Miteb Bin Abdullah, the Minister of Economy and Planning, Adel Fakeih, and Admiral Abdullah bin Sultan bin Mohammed Al-Sultan, the Commander of the Saudi Naval Forces. 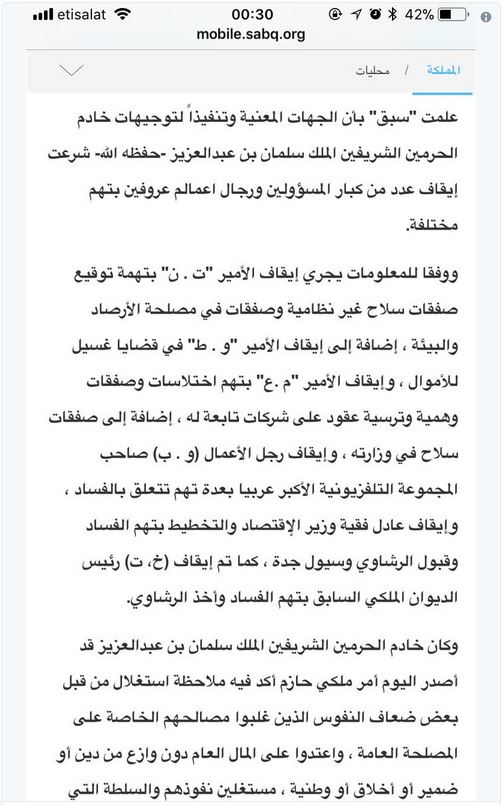 According to a Royal Decree issued by King Salman on Saturday the anti-corruption committee is chaired by the Crown Prince with the membership of: Chairman of the Monitoring and Investigation Commission, Chairman of the National Anti-Corruption Authority, Chief of the General Audit Bureau, Attorney General and Head of State Security.

As Saudi analysts were quick to point out, the purge by the Saudi King means that King Abdallah’s last remnants (Riyad firmer gov. & head of Nat. Guard); media moguls; SAGIA & financial policy officials have been purged.

As Bloomberg notes, changing the head of the National Guard, an institution that’s been controlled by the clan of the late King Abdullah, “is not like changing the minister of oil,” said Kamran Bokhari, a senior analyst with Geopolitical Futures and a senior fellow with the Center for Global Policy. “I wouldn’t be surprised if this leads to greater fissures within the royal family.”

Arabiya adds that King Salman also issued sacking and replacement orders for Admiral Abdullah bin Sultan bin Mohammed Al-Sultan, the Commander of the Naval Forces, is to be terminated and be retired; his replacement is Vice Admiral Fahd bin Abdullah Al-Ghifaili, to be promoted to the rank of admiral and be appointed as Commander of the Naval Forces.

Al Tuwaijri, formerly vice minister for economy and planning, had already played a key role in shaping Saudi economic and fiscal policy over the past year. Before joining the government in May 2016 he was Middle East chief executive for HSBC. He’s served as a frequent spokesman for the government’s economic reform plan on TV and with Western journalists.

King Salman also issued an decree forming an anti-corruption committee headed by the crown prince. Its powers include the ability to trace funds and assets, and prevent their transfer or liquidation on behalf of individuals or entities, along with the right to take any precautionary actions until cases are referred to relevant investigatory or judiciary authorities, according to a government statement.

The committee’s formation was deemed necessary “due to the propensity of some people for abuse, putting their personal interest above public interest, and stealing public funds,” the Royal Order said. 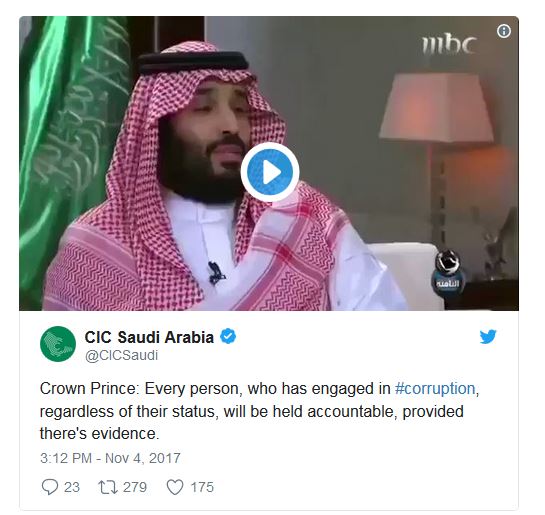 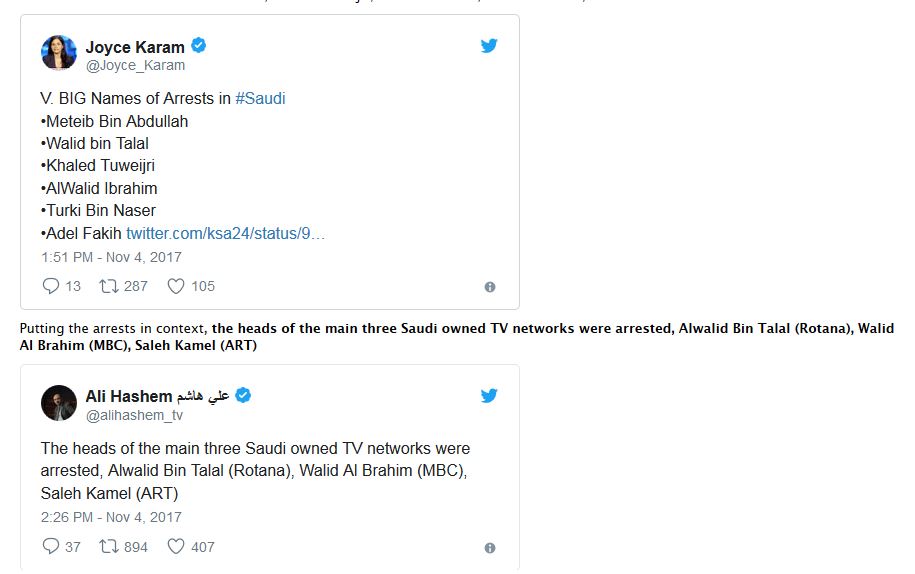 As Bloomberg adds, Saudi King Salman appointed a former HSBC banker to head the country’s economy ministry and removed one of the royal family’s most prominent princes from as head of the National Guard. Separately, a number of Saudi princes and former ministers were arrested by authorities hours after the announcement of a new anti-corruption committee, with sweeping powers and headed by Crown Prince Mohammed bin Salman, the Saudi-owned Al Arabiya news service reported.

Prince Miteb, son of the late King Abdullah, was replaced as minister of the National Guard by Prince Khaled Ayyaf, according to a royal decree carried by state-run media late Saturday. Before his ouster, Prince Miteb was one of the few remaining senior princes to have survived a series of cabinet reshuffles that promoted allies of the crown prince, who is the king’s son and heir to the throne.

King Salman has sidelined other senior members of the royal family to prevent any opposition to the crown prince. Prince Mohammed, 32, replaced his elder cousin, Muhammed bin Nayef, as crown prince in June, a maneuver that removed any doubt of how succession plans will unfold following the reign of King Salman, now 81.

While details remain scarce about this “Saturday of the long Saudi knives” – which some have suggested may be a countercoup attempt –  DPA confirms the Al Arabiya report that three senior state officials were sacked.

No official explanation was given for the sackings.

In recent months, the Saudi monarch has carried out a string of reshuffles appointing young people in senior state posts. In June, Salman ousted his nephew as the crown prince and appointed his son Mohammed to become the first in line to succeed him. The monarch on Saturday ordered the creation of an anti-corruption committee led by the crown prince amid a rumoured crackdown on suspected tainted officials and royals. Mohammed, 31, is seen as the driving force behind opening up the ultra-conservative country to the outside world and weaning its economy off oil.

Furthermore, there is speculation that all private flights and VIP departures out of Saudi Arabia have been suspended temporarily, similar to what happened following the last “gentle coup” in June when Prince Mohammed (MBS), 32, replaced his elder cousin, Muhammed bin Nayef, as crown prince in June, a maneuver that removed any doubt of how succession plans will unfold following the reign of King Salman, now 81. 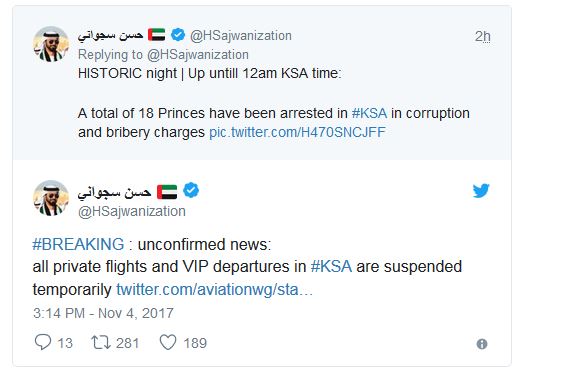 That put all apparatus of the military-intelligence network in the hands of Muhammad bin Salman.  News that Al-Walid bin Talal has been arrested and accused of money laundering.  This could be a service to Trump, who hates Al-Walid: the two fought it out on twitter during the campaign although Al-Walid tried to reconcile with Trump after his election but to no avail.

Bin Talal’s arrest and the government reshuffle caps off a bizarre day for Saudi newsflow, which started with the resignation of Palestinian prime minister Saad al-Hariri, who announced he was quitting due to fears of an assassination plot, allegedly organized by Iran, followed shortly after by the Saudi defense forces intercepting a ballistic missile as it was about to strike the capital Riyadh.

This is a developing story.