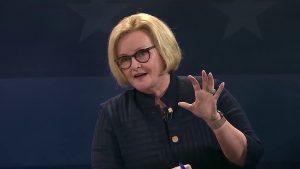 MCCASKILL: Let me just say about the Veritas videos, there was nothing in those videos that were bad from my perspective because people in Missouri know where I stand on these issues. They got some kids behind closed doors talking about of school, big deal. I’ll tell you what was a big deal. They fraudulently embedded themselves in my campaign for weeks, for weeks, misrepresenting who they were. They got into our computers, proprietary information, for 20 hours. Who knows what they stole. They weren’t there to help me. They were there to help Josh Hawley. And the idea that a complaint has been filed with the Attorney General’s office, and when we called to ask about the complaint they said call the campaign. The Attorney Genreal’s office can not allow there to be a new normal that fraud can be committed in anybody’s campaign. I don’t care if its somebody I’m for or somebody I’m against. If somebody can come in and commit fraud and get in your computers and the Attorney General does nothing, that cannot be the new normal.

HAWLEY: There’s the Washington two-step right there. Sen McCaskill is caught saying something on video, and she blames me. Her initial reaction was to accuse me of fraud. To accuse me personally, of fraud. Which is absolutely outrageous and totally not true. And then to ask the state of Missouri I guess to appoint a prosecutor with taxpayer money to go after her political opponents. Now I know its become fashionable on campuses for liberal democrats to shut down speakers they don’t like. But I have never heard of the state appointing a prosecutor with taxpayer money to go after a political opponent. And to accuse me, I just think, we’re at the desperation phase of Senator McCaskill’s campaign.

MCCASKILL: You know, I’m not asking for – a lot of- by the way, he’s appointed special prosecutors all the time, he’s, his office there’s been three different articles written in the past wo weeks about the mess in his office. He’s in a hurry. He’s never even gone in a courtroom and tried a criminal case in his life. So maybe he should be appointing other prosecutors. But the point is that this was a FRAUD. This isn’t about the tape. People in Missouri know where I stand. I’ve done 52 town halls. I’ve walked anywhere in Missouri and said come on in ask me any question. I’m not afraid to tell anybody where I stand. I am afraid of an Attorney General that looks the other way when somebody comes in and steals proprietary information out of somebody’s computer.

MODERATOR: Ms. McCaskill, do you blame Mr. Hawley’s campaign for that video?

MCCASKILL: No, I don’t blame him for that video. But what I do blame him for is when a complaint is filed under the Merchandise Practicing Act, which he talks about and touts all the time, with a clear prima-facie case is laid out, that instead of immediately saying of course we’ll look into it, they refer us to his campaign. As if this was not a serious a matter. That’s what I’m complaining about.

MODERATOR: And Mr. Hawley, did you campaign have anything to do with that video?

HAWLEY: Absolutely not. And to accuse me of fraud, which is what Senator McCaskill did, she said that I committed fraud, that I participated in a fraud, she said that on television, I just…

MCCaASKILL: I didn’t say that on television…

HAWLEY: It’s on Color 10, the video is widely available, I’m sure its being sent even now. I invite you to look at the record. But these kind of desperate attacks are sad to see especially at the end, its been a long 36 year career for senator McCaskill. But I hope this isn’t the way she’s going to go out.