I’ll Start Believing All Women When Democrats Do

I’ll Start Believing All Women When Democrats Do

Democrats have defended men accused of sexual assault, rape when they came from their own party
By Brian Cates, published on The Epoch Times, on October 9, 2018 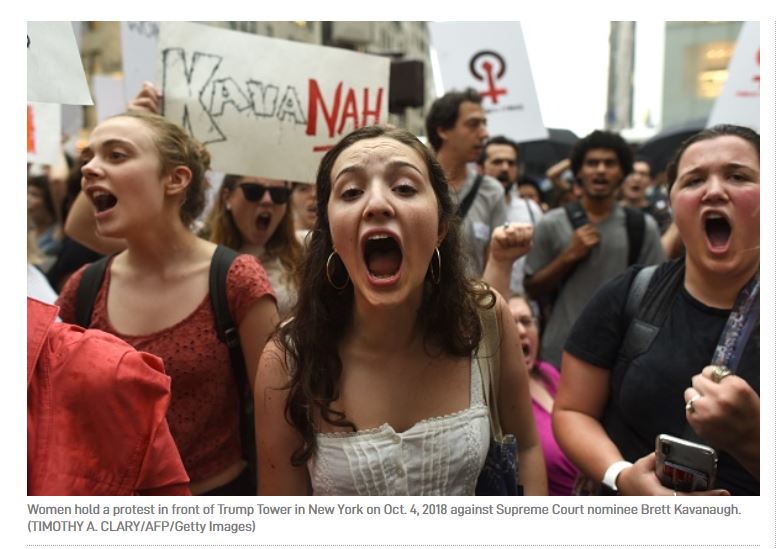 The American people were just treated to several weeks of angry demonstrations that demanded they must believe all women who claim they have been sexually assaulted or physically abused.

These coordinated protests by political activists began right after the Senate Judiciary Committee concluded hearings on the nomination of now-Justice Brett Kavanaugh to the Supreme Court.

Suddenly, Senate Democrats sprang a surprise they were holding back for more than six weeks—a letter from a California professor named Christine Blasey Ford, who claimed that Kavanaugh had sexually assaulted her 36 years ago when they were both in high school.

That turned out to be a mere prelude to a week of ever-escalating assault claims from new accusers that became ridiculously absurd—including one woman who claimed Kavanaugh was a ringleader of a group who gang-raped numerous women at more than 10 parties.

No matter how absurd or thinly supported the escalating claims were, the same cast of characters was on hand to demand that Americans must “believe the women.”

They don’t do what they are screaming for other people to do. What is it that you call someone who loudly and publicly demands other people do something they don’t do themselves? Ah yes, a hypocrite.

For the record, in the past, Democrats and their news-media friends didn’t believe any of former President Bill Clinton’s sexual-assault victims. I’m not talking here about the various adulterous liaisons he had with several dozen willing women, among them Monica Lewinsky, Gennifer Flowers, and Elizabeth Gracen.

I am referring to the women who went public with claims that Clinton sexually assaulted them: Juanita Broaddrick, Paula Jones, and Kathleen Willey.

Right now, many of these same people insisting we must believe all women are refusing to believe Karen Monahan—or even acknowledge her.

Who’s Karen Monahan, you ask? She is the former girlfriend of Keith Ellison, the current third-ranking Democrat in the House of Representatives.

Last time I looked, Monahan appeared to be a woman.

Guess what job Ellison is running for? It’s Minnesota attorney general, where he’d have oversight of any investigations into himself, including the one Monahan is trying to start by going public with her story.

That looks extremely shady, giving up a national post in the Democratic Party in Washington, to run back to Minnesota to grab a state-level job. He’s doing it at a time a woman is coming forward in Minnesota to accuse him of physically abusing her.

Unlike Ford, Monahan claims to have actual evidence of her abuse from as recently as just a year ago, in the form of documentary evidence—doctor’s forms and medical records from a therapist—and a video of herself being dragged off of a bed by Ellison.

She says she can also provide people she confided in about the abuse, including her son—who saw the physical marks on her body.

It’s All About Politics

So, on the one hand, political agitators insist we must believe an allegation from more than 35 years ago, even as none of the people Ford claimed could corroborate her story did so. At the same time, they laugh off and ignore Monahan, who at least claims to have evidence and eyewitnesses to the physical marks of the abuse she suffered in 2017 at Ellison’s hands.

What these mindless yelling protesters really mean is, “Before I Know Whether Or Not To Believe This Woman, I Must First Know The Politics Of The Guy She’s Accusing.”

Hint: If you are basing your decision to believe or not believe a woman who says she has been assaulted based on the politics of the guy she’s naming as having done it, not only are you not believing all women, you’re engaging in the absolute worst kind of political partisanship.

Maybe there was an agreement on the progressive left to memory hole the Duke lacrosse rape scandal and the University of Virginia rape hoax, but the vast majority of Americans made no such agreement.

Most Americans are very aware that sometimes women lie about being assaulted, and there are many public examples of just such a thing being discovered, as investigative journalist Nick Monroe helpfully compiled, putting together a list of no fewer than 70 instances where men were falsely accused of rape or sexual assault.

So, there are good and valid reasons not to believe all women, no matter how loudly some people yell and stamp their feet about this. Each case must be examined individually; the outcome must never be determined solely on the basis of gender.

Here’s what conservatives are being confronted with: They got screamed at for doubting the stories told by Tawana Brawley, Jackie Coakley, and Crystal Mangum; they were loudly denounced as “rape apologists,” and then the same political activists that did all that screaming and denouncing turned around and called Broaddrick, Jones, Willey, and any other woman who dared accuse a top Democrat of being lying bimbos.

These political operatives need to stop yelling at people because it simply isn’t working. No one is buying the act anymore.

Radical feminists just made a play in front of the whole nation to ditch due process and the presumption of innocence. It says a lot more about them that they even tried this than it does about the country that is going to reject their fanatical extremism.

Brian Cates is a writer based in South Texas and author of “Nobody Asked For My Opinion … But Here It Is Anyway!” He can be reached on Twitter @drawandstrike.