‘I can now climb trees’: 6yo kid gets prosthetic arm from 3D printer

‘I can now climb trees’: 6yo kid gets prosthetic arm from 3D printer 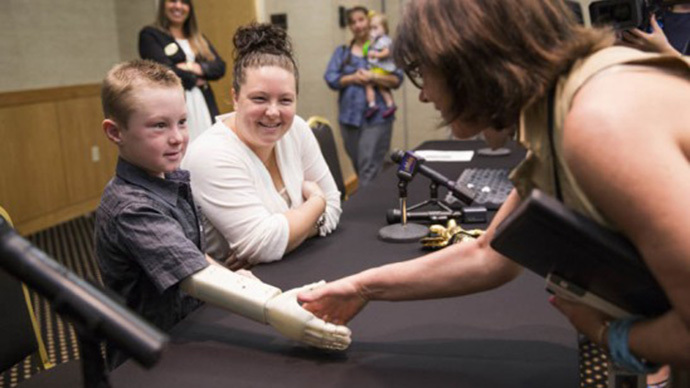 A 6 year-old boy from Florida born with right arm deficiency has received a prosthetic replacement. Now climbing a tree and catching a ball will be easier for him. Students from Florida University made it on a 3D printer for just $350 in just 8 weeks.

Help for little Alex Pring, missing his right arm from just above the elbow, came from students at the University of Central Florida. An engineering doctoral student, Albert Manero, heard about the boy’s needs and decided to recruit a team of students to create a solution for the boy.

“I mean, I’m me. So I don’t have an arm,” little Alex said. “I still try real hard to do things like other kids using what I’ve got. But it’s getting harder the more I grow,” according to the official website of University of Central Florida.

The arm and part of the hand were made on a 3D printer. They run with off-the-shelf servos and batteries that are activated by the electromyography muscle energy in Alex’s bicep.

Alex’s new limb only cost $350 to build. In comparison, prosthetic arms for children cost much more – about $40,000 – and they have to be replaced often as children grow.

Also prosthetics for kids are more difficult to make than for adults because the components are much smaller, according to Manero. When Alex gets too big for his new limb, new parts will be printed and they will also be cheap– only $20 for a new hand, and around $40 to $50 for a replacement forearm.

The arm was delivered to Alex on Friday. He practiced his new limb on a toy duck. He managed to grip the toy and squeeze it with his new hand. Then he rushed to his mother to hug her with both hands –for the first time in his life.

“When he hugged me with two hands, he just didn’t let go,” said Alyson Pring, Alex’s mother. “It was amazing. I think it will help his confidence, so he can see future possibilities and make them seem all the more reachable for him.”

Manero, who has a master’s degree from UCF in aerospace engineering and is writing his Ph.D., said he believes the team’s design could help many similarly affected children.

And the enthusiastic team doesn’t want to stop at Alex – they have decided to help all children with such problems.

“We’ve already heard from another family who needs an arm. We’re committed to helping who we can.”

“ I think 3-D printing is revolutionizing our world in many ways. I believe changing the world of prosthetics is very real. There’s no reason why this approach shouldn’t work on adults too.”