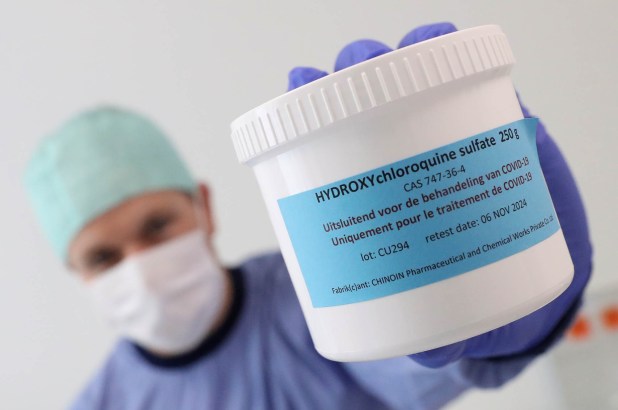 A new study has found that the antimalarial drug hydroxychloroquine helped COVID-19 patients better survive in the hospital.

A team at Henry Ford Health System in southeast Michigan said Thursday that a study of 2,541 hospitalized patients found that those given the drug were far less likely to die, CNN reported.

“Overall crude mortality rates were 18.1 percent in the entire cohort, 13.5 percent in the hydroxychloroquine alone group, 20.1 percent among those receiving hydroxychloroquine plus azithromycin, 22.4 percent among the azithromycin alone group, and 26.4 percent for neither drug,” the team wrote in a report published in the International Journal of Infectious Diseases.

The study came a little more than two weeks after the Food and Drug Administration yanked its emergency use authorization for hydroxychloroquine as a treatment for the coronavirus in hospitals, citing a lack of evidence it worked and that the risks outweighed any potential benefits.

The agency said the drug, along with a similar version called chloroquine, which is normally prescribed to treat malaria and some forms of severe arthritis, was “unlikely to be effective in treating COVID-19,” according to a statement.

The FDA authorized the emergency use of the drugs in March, and President Trump has touted the drug — which he said he himself took as a preventive measure with no side effects.

“I can’t complain about it,” he said after the FDA’s move, which did not prevent doctors from prescribing it for individual patients. “It certainly didn’t hurt me.”

Researchers not involved in the new research said it wasn’t as sound as others studies showing hydroxychloroquine did not help patients, and said other treatments, such as the use of the steroid dexamethasone, might have accounted for the better survival rate, according to CNN.

“Our results do differ from some other studies,” Zervos told a news conference. “What we think was important in ours … is that patients were treated early. For hydroxychloroquine to have a benefit, it needs to begin before the patients begin to suffer some of the severe immune reactions that patients can have with Covid,” he added.

The researchers said their findings showed that hydroxychloroquine could be potentially useful as a treatment for coronavirus, which has killed nearly 130,000 Americans to date, according to Johns Hopkins University.

“It’s important to note that in the right settings, this potentially could be a lifesaver for patients,” Dr. Steven Kalkanis, CEO of the Henry Ford Medical Group, said at the news conference.

Researchers not involved with the study said the Henry Ford team did not randomly treat patients but selected them for different treatments based on each individual’s condition.

“As the Henry Ford Health System became more experienced in treating patients with COVID-19, survival may have improved, regardless of the use of specific therapies,” Dr. Todd Lee of the Royal Victoria Hospital in Montreal, Canada, and colleagues wrote in the same medical journal.