New observations show that 2I/Borisov looks like a comet, just what astronomers expected

By Maria Temming, published on Science News, on October 14, 2019

BZ: When you read articles like this one or from any other source that is “Handled” and fed the allowable published line, read/see what is being shown to you, what is hidden in plain sight as part of “the rules” of how the false construct is laid out/played… 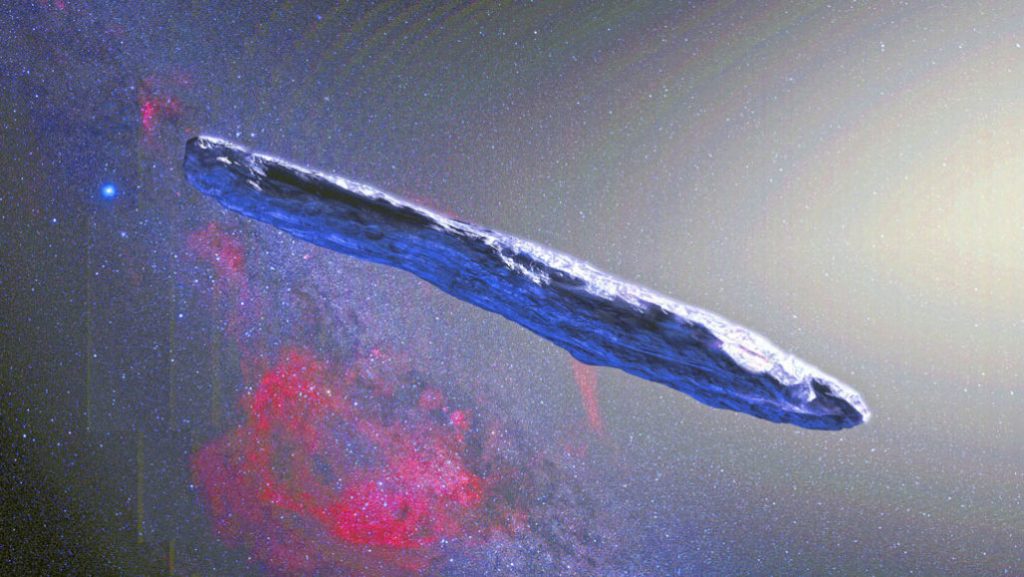 The second space rock seen visiting our solar system from another star is proving just how bizarre the first known interstellar object, ‘Oumuamua, really was.

‘Oumuamua raised eyebrows when it appeared in October 2017 looking more like a rocky asteroid than an icy comet (SN: 10/27/17). Because comets form farther from their host stars than asteroids, it should be easier for comets to escape their star’s gravity to wander the galaxy. So astronomers expect the vast majority of interstellar vagabonds to be icy bodies. But ‘Oumuamua didn’t sport the gaseous halo or tail that forms when sunlight vaporizes a comet’s ice.

Astronomers observed 2I/Borisov on two nights in September with the William Herschel Telescope in the Spanish Canary Islands and the Gemini North Telescope in Hawaii. Those images reveal that, like comets native to our solar system, 2I/Borisov’s core is shrouded in a gaseous halo trailed by a faint, broad stream of gas and dust. 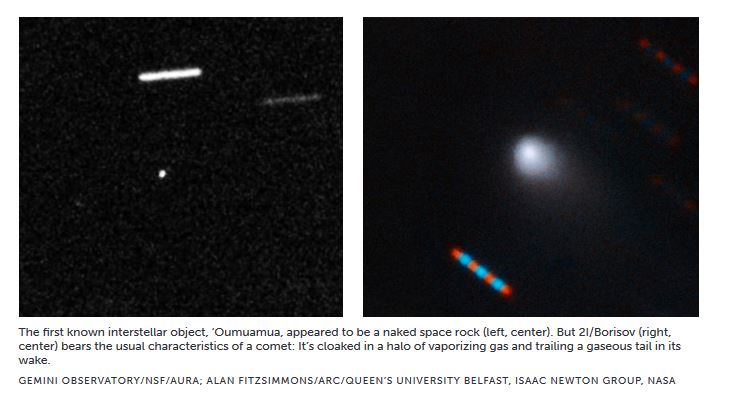 “It’s kind of relieving that finally we have something that meets our expectations,” says study coauthor Michał Drahus, an astronomer at Jagiellonian University in Kraków, Poland. “Now we really can be absolutely sure that ‘Oumuamua was one weird object.”

Whereas ‘Oumuamua vanished within weeks of its discovery, astronomers have several months to take a closer look at 2I/Borisov. Higher-resolution telescope images may tease out the exact size and shape of its core, and inspecting the specific wavelengths of light emanating from the comet could help astronomers flesh out its chemical composition.

Preliminary wavelength observations have already hinted that 2I/Borisov contains cyanogen gas (made of carbon and nitrogen atoms), which is relatively common in comets native to the solar system. Astronomer Alan Fitzsimmons of Queen’s University Belfast in Northern Ireland and colleagues report these findings October 2 at arXiv.org.

The second known interstellar object, a comet currently cruising through our solar system called 2I/Borisov, looks fairly different from the first discovered interstellar visitor — an asteroid-like object called ‘Oumuamua that skirted by Earth in 2017. Here are some of the key distinctions between this pair of galaxy-trotting space rocks.

Differences between the first and second discovered interstellar objects