Hollywood writer goes on the road with JFK assassination evidence 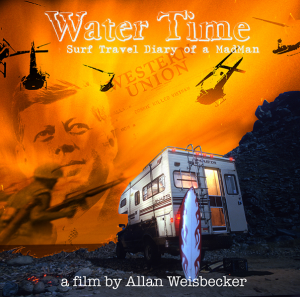 Hollywood writer goes on the road with JFK assassination evidence

This is about a relentless film. A film that doesn’t care what happens when false reality is ripped away. A film that actually does what every person who knows the truth wants to do.

This is a film you should see. It’s called Water Time, and if you go to banditobooks.com, you can watch it for free, by signing up on Allan Weisbecker’s email list.

Allan is the director and the star of Water Time. He made a good living writing for Hollywood into the mid-90s (Miami Vice, Crime Story), when he quit the scene to live a different kind of life.

A much, much different kind of life….that culminated in going on the road to see what had happened to America. Driving his truck, with his dog Honey, with his surfboard, with his laptop, on which he’d stashed compelling evidence that key events in modern American history had resulted in a shadow takeover of the country. A coup d’etat.

That’s one of the subjects of the film.

It’s about a man who knows the truth and wants to talk about it with average Americans on camera, before your eyes. It’s about a man who makes his own frontier, who mourns the loss of his childhood friend who died in Vietnam, a war made into a horror through the assassination of JFK.

This film forgets all about the smooth kind of Hollywood that, when all is said and done, ruffles no feathers. Water Time barrels into the present American malaise and explodes the barriers and the veils and membranes between vital information, life-changing information, and American people who are just “living their lives.”

Weisbecker sits down with them, opens his laptop, and shows them evidence that the JFK hit was a conspiracy. He shows them a few of the very strange things that happened on 9/11. He doesn’t back down. He pushes forward with uncompromising logic.

Water Time is a record of what happens when a truthteller puts that logic in people’s faces. You see the reactions, the denial, the insanity.

You also see water and waves and surfing. You see a man out there on his own, with his beloved dog, having a hell of a time, a man on a relentless pilgrimage. You see the Open Road of America, created again, by a filmmaker who doesn’t shrink away from what he finds out there beyond the digital universe.

Water Time. Real Time. A diary on film unlike any you’ve ever known.

Most of all, this is a film about one man who has crossed the illusory threshold, a knight errant with a surfboard who’s thrown false comfort and false security overboard and is willing to be himself and shove in all his chips on the cosmic bet anyone of us can make. With enough courage, with enough outrage, with enough savage joy, with enough intelligence, with enough soul.

Get rid of all your preconceptions about Hollywood-type movies and take a gander at the real thing. I wish we had a thousand different versions of Water Time, made by a thousand men and women in their own way. Then we would have a real revolution. But we have one version, for which we should be grateful. Water Time. A different kind of time. Raw and disturbing, and as you move deeper into it, very beautiful.

The author of three explosive collections, THE MATRIX REVEALED, EXIT FROM THE MATRIX, and POWER OUTSIDE THE MATRIX, Jon was a candidate for a US Congressional seat in the 29th District of California. He maintains a consulting practice for private clients, the purpose of which is the expansion of personal creative power. Nominated for a Pulitzer Prize, he has worked as an investigative reporter for 30 years, writing articles on politics, medicine, and health for CBS Healthwatch, LA Weekly, Spin Magazine, Stern, and other newspapers and magazines in the US and Europe. Jon has delivered lectures and seminars on global politics, health, logic, and creative power to audiences around the world. You can sign up for his free emails at www.nomorefakenews.com