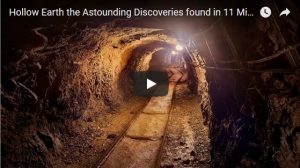 COAST TO COAST AM. Evidence for the Hollow Earth, as well as communications from Native American elders that relate to and support the Hollow Earth theory. He recounted the legend of J.C. Brown, a man who supposedly worked as a geologist for the Lord Cowdray Mining Co. in the early 20th century and claimed to have discovered an ancient Lemurian civilization in the hollows of Mt. Shasta, California in 1904. Following an 11-mile tunnel that burrowed into the mountain, he reported finding a village which had such relics as 12-ft. copper tablets, statues, weapons, and skeletons that were large as 10 ft. tall. The statues glowed as if they used radium as an element in the copper, he added. Researcher, adventurer and documentary filmmaker, Stephen Sindoni was interviewed by George Noory.