Hierarchy Closed Down The Trapdoor Being You 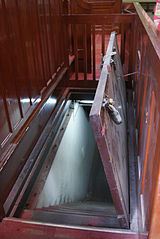 Hierarchy Closed Down The Trapdoor Being You

Once again I am observing from my galactic observation post how things are unfolding. Changes have taken place  in absolute form . The will of the people and the power of their human awakened parts has been an off the meter experience. If that experience was induced or not does not matter anymore. The ones you call the PTW or ‘powers that were’ have been really shown their time is up and the show is over.

You have to know that all is played on several levels like a multidimensional chess game. The top has been notified that the game is over and the hierarchical structure is no more, period.  The expressed anger and disappointment and disillusion of the role that is not anymore is what now is shown. It is so to say not easy to play if there is no play anymore. It is now about coming to grips with that outcome. That will lead to concluding unity talks to get the best for all solution (without duality) happening.

The recognizing of the  facts not being in power are now trickling through the layers. With a bit of the last level earthly chess it can be called now check mate.  The importance for us human beings is now to keep seeing we are still the ones that with our inner-power and intent make clear that we wanna be responsible creator beings that know to co-create a world that is not build on the old duality disintegrating structures, but in a really new way.

We are individuals that are separate from each other and each of us is  a creator being.  But we are also  knowing to be still individuals that live in and want to live in a  multidimensional reality with all. So the collective of all that is.  This is not a beehive or drone like idea that still is spread and induced upon you by so many in several different forms.

Be aware not to fall in the same traps again. You can create your own religion or belief system again even after being awakened just by falling in the trap. If you choose to be  staying individuals that connect with others  but keep independent and do not let yourself be sucked into group mind thinking and not let yourself be manipulated to get back into belief structures in any way will find the trapdoor closed.

It is all about being responsible for the self empowered you. It is about being you and still keeping the openness and harmony to keep interacting from your heart center with all.  Again, that does not mean you become a drone or a worshipper, follower or believer in a certain expected or told to be expected outcome.

There is only you that can see the full truth within. Every time you are going to be crossing that  line of being part off in a way of being  confined to or bound to a space, or a  group or a certain way of doing things you will lose your individual true empowered self. You are given your power away again.  People create new systems and beliefs over and over by just not seeing the trap.

You are a bunch of individual creators that can work together but you are not collective drone minds or beings that act as one.  Oneness is not about giving up your individuality as a creator being.  It is about being One with all but still having your  individual identity. Just being YOU without limits  in the collective.

The  moment you get a group feeling or group manifesting going that will not allow you to be the true self-empowered you as an individual, you will create a belief, church, sect  or drone like structure. Those forces that want to get you into that state of collective drone mind behaviour are having hidden agendas. For those that self induce the drone like behaviour freely should realize  that they willingly fell into the trap again.  Be aware.

Also I am observing the vibrational energy raising  having profound effects on people. Like being  jumpy or impatient or volatile or having mood swings. The biggest and grandest things happening now are being aware of your god like abilities, seeing and being in multidimensional space or bi-location. Also being able to have telepathic conversations or having profound visions and knowing who you are and were are just a few examples. Also physically you will have some experiences as that is with every influx of the vibrational frequency and your upgrade a part of the story.

It is  NOW you are remembered again to get those last bits of duality out of your system. Integrating that what was and  also transmute that what is not beneficial anymore is needed to balance out all again.

You are remembered, like also above explained, to be YOUR OWN creator self that finds the power and knowledge within the heart-source connection. That being you are, is remembered to be you and not that what others expect you to be or you belief you should or could be or are directed or taught to be the right way for you to be.  You have as said all the answers within. You only know you.

Do not let you be guided by anything else than that what is really coming from your heart-source connection and higher self as the truth for you to be.  If it ain’t you it is not for you.  If you can not resonate with it than please do not force yourself to resonate.  The lessons learned from the past are not to be acting as sheeple.  You can take in a lot from others discern it and feel if it is you or resonates with your higher self.   You need not “belief” or do anything to know what you know is inside of you.  That also means get out of a saviour modus.

Nobody is coming to safe you but yourself.  It is YOU that does saves you.  You, that being who has a free will and had forgotten about it.  You got raised, educated and trained to comply with the false financial and belief system. You forgot the true origins of you and your power within which you had unwillingly or willingly given away to others and the system. You came here to wake up at a certain time to know again what you are here for.

You will know what part you played and  what role you have.  You will acknowledge in the end you are truly a free will creator being with enormous power from your source within that is connected to all that is . You will see you have capabilities beyond imagination to be and create and manifest in the multidimensional layout we are gonna create as our new reality.

Keep in mind to be you as that should be enough to handle. Others need to be themselves and go find their selves within.  It is not a job for you to take upon that what others need be doing. You can support, help,  advice and give your view but they have to go through their own process.

Keep your head cool, know there is no wrong or right and know there is only the perception of time reality not time itself.  Have a wondrous day as I see the lights already radiating of those that now even in a perceived time feeling go faster through their processes to be fully consciousness aware of what and who they are. We all are soon ready to take upon us the new role of wayshowers and leading our universe into a new  collective dimensional reality creation.

If you have forgotten to support the blog and the efforts made for free please do remember to give something back when you can! Also if you have gained from the traffic upon this blog think about maybe giving something back.

Love you all in gratitude and happy days are really here to come!

You can find the donation button on the lucas2012infos blog’s main page or donate via PayPal  via lcspeciaaladres  (ad sign) gmail. com put in also the reference:  lucas2012infos blog donation. Think also to donate to  those other truly inspiring websites and blogs, freely for you kept as lights on the firmament to help you on your journey with inspiration, knowledge and joy. In gratitude to you all. Lucas

(c) 2013 –  Copyright of Lucas, all writings of Lucas maybe published, re-blogged and posted only in full without altering anything with  the http://www.lucas2012Infos.wordpress.com  link  mentioned in the article with name of the author Lucas.