“If you want to find the secrets of the universe,
think in terms of energy, frequency and vibration.” ~ Nikola Tesla

Tesla said it. Science proved it. It is a known fact that everything—including our own bodies—is made up of energy vibrating at different frequencies. That being said, can sound frequencies affect us? They sure can. Frequencies affect frequencies; much like mixing ingredients with other ingredients affects the overall flavor of a meal. The way frequencies affect the physical world has been demonstrated through various experiments such as the science of Cymatics and water memory.

The science of Cymatics illustrates that when sound frequencies move through a particular medium such as water, air or sand, it directly alters the physical structure of matter. Below are pictures demonstrating how particles adjust to different frequencies.

Water memory also illustrates how our own intentions can even alter the material world. This has been demonstrated by Dr. Masaru Emoto, who has performed studies showing how simple intentions through sound, emotions and thoughts can dramatically shape the way water crystallizes.

We all hold a certain vibrational frequency, not to mention our bodies are estimated to be about 70% water… so we can probably expect that music frequencies can alter our own vibrational state. Some may call this ‘pseudoscience,’ however the science and patterns shown above don’t lie. Every expression through sound, emotion or thought holds a specific frequency which influences everything around it—much like a single drop of water can create a larger ripple effect in a puddle.With this concept in mind, let us bring our attention to an important change that occurred in September 1939. The international musical pitch of 432 Hz—which also happens to be in sync with the natural tuning of the universe—was changed to 440 Hz with the persuasion of Nazi propaganda minister Joseph Goebbels. Prior to the change, musicians worldwide had carried out a widespread rejection of this tuning. So why was the pitch changed? Without delving too far into the conspiracy side of things, during the time between World War I and II, scientists were researching music frequencies wanting to establish the range of frequencies which best induced fear and aggression. These studies were funded by the Rothschild-Rockefeller alliance, represented by the Rockefeller Foundation and U.S. Navy.“There are a lot of people who consider modern music annoying. Many become emotionally disturbed listening to certain types of music. What few people realize, regardless of the type of music played in the Western World, the standard Anglo-American tuning for instruments and voices was instituted at the same time, by the same agents and agencies, advancing acoustic war studies for inducing ‘mass hysteria.’” – Leonard G. Horowitz, DMD, MA, MPH, DNM (hon.)Let’s explore the difference between 440 Hz and 432 Hz. The noticeable difference music lovers and musicians have noticed with music tuned in 432 Hz is that it is not only more beautiful and harmonious to the ears, but it also induces a more inward experience that is felt inside the body at the spine and heart. Music tuned in 440 Hz was felt as a more outward and mental experience, and was felt at the side of the head which projected outwards. Audiophiles have also stated that 432hz music seems to be non-local and can fill an entire room, whereas 440hz can be perceived as directional or linear in sound propagation.

“This unnatural standard tuning frequency (440 hz), removed from the symmetry of sacred vibrations and overtones, has declared war on the subconscious mind of Western Man.” L. C.

I personally have enjoyed many bands, artists and styles of music even though they were tuning in 440 hz, however by comparing a few songs in both 432 hz and 440 hz, I can feel and hear the difference. I wouldn’t say that my experience of 440hz music has turned me into an aggressive person, but I can understand how an entire population being exposed to music that is more mind directed as opposed to heart directed—not to mention all of the materialistic and ego-driven lyrics in most popular music—is a perfect combination to maintain a more discordant frequency and state of consciousness within humanity. 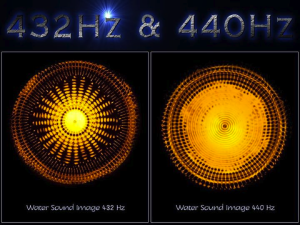 It is said that the 432hz tuning vibrates with the universe’s golden mean PHI and unifies the properties of light, time, space, matter, gravity and magnetism with biology, the DNA code and consciousness. When our atoms and DNA start to resonate in harmony with the spiraling pattern of nature, our sense of connection to nature is magnified. Isn’t it about time we start embracing what is natural?

“Music based on C=128hz (C note in concert A=432hz) will support humanity on its way towards spiritual freedom. The inner ear of the human being is built on C=128 hz” – Rudolph Steiner

If you are interested in changing your music to 432 hz, it is possible to do so with a program called audacity. Here are the steps:

Here is a program that can also do it for you: http://returnto432.com/

Why Don’t You Try This: http://www.whydontyoutrythis.com/2013/08/440hz-music-conspiracy-to-detune-good-vibrations-from-natural-432hz.html