published on The Outlaw, An act of defiance 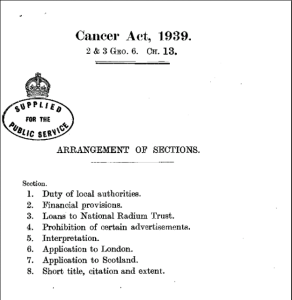 To see the act scroll to bottom of post.

It does appear that not many people know anything about it, yet many thousands of people have, and will continue to suffer from it’s effects.

Basically, it is a particularly restrictive and pernicious piece of legislation which prevents people from writing or speaking about the FACT that it is indeed possible to cure cancer using alternative methods.

The Cancer Act may also be the reason why many websites and blogs are now being threatened with fines of up to £1000, simply for alerting people to the very real dangers associated with conventional treatments.

If you do even the most basic research, you will find that among the excuses that have been put forward for the introduction of this act, was to ‘Protect the public from Quackery and Charlatans,’ but it now appears far more likely, to ensure that all types of cancers, were only to be treated by ‘Radium-Based’ methods (Cancer Inducing Radiation).

It may have also been seen, as being neccesary to introduce such an act to protect the profits of Pharmaceutical companies, as in 1938, there were people only too aware of the risks and were offering people viable alternatives.

Even in 1939, the medical information that the Act was based on, was out-dated and believed by some more enlightened people, to have been blinkered, even obstructive and harmful in it’s purpose.