Pair of ‘Sovereign Citizens’ stand trial in Knox; one sought meeting with Trump

BZ: A fine example of our main stream media- (CIA wing of the#DEEPSTATE) taking the “Company Line” and running with it. Another beautiful example of all unfolding and Unbinding/unwinding for all to see.

You can watch as three women discuss what actually went on in the court room by clicking this link. One of those women,Sheila Corona is pictured in this image of #HATJ (over right shoulder) outside the Eastern Tennessee District Court Tuesday morning 1.23.18 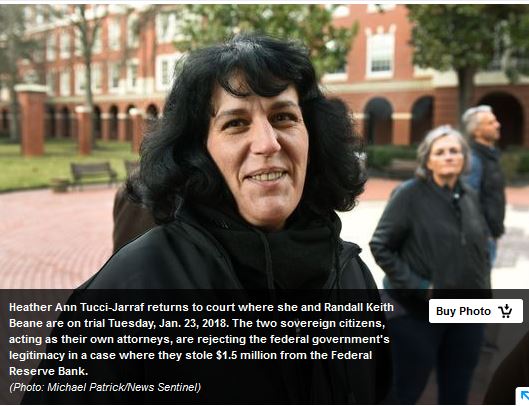 Both are affiliated with the Sovereign Citizens movement, a loose affiliation of citizens who insist the federal government is illegitimate and often use that mantra as a defense to a host of financial crimes, including tax evasion and fraud.

Testimony Tuesday in Chief U.S. District Judge Tom Varlan’s courtroom showed Tucci-Jarraf was arrested in July after she showed up outside the White House and demanded U.S. Secret Service agents allow her inside for a meeting with the president.

That same day she posted a YouTube video about Beane’s related arrest in Knoxville. Both are the subject of a Change.org petition by fellow Sovereign Citizens demanding the pair be freed.

Tucci-Jarraf was a licensed lawyer in Oregon who worked for a time as a state prosecutor before she became involved with the Sovereign Citizens movement and soon became a leader in the One People’s Public Trust, a group with similar leanings that claimed it “foreclosed” on all world governments and promised followers they could collect a slice of $10 billion in gold and silver using “collection notices.”

The One People’s Public Trust dissolved a few years ago, but Tucci-Jarraf remained a well-known “legal adviser” for Sovereign Citizens, such as Beane, a veteran of the U.S. Air Force who was working for Advantage Innovations in Knoxville.

Check-kiting for the modern age

They allege Beane concocted a scheme last year to use automatic delays in the banking system of transfers of money from one bank to another – essentially an online method of the old-fashion check-kiting scheme – to buy Certificate of Deposits using the Federal Reserve Bank’s routing number and a fake checking account number, quickly liquidating the CDs and stashing the money in his USAA accounts.

USAA allowed its members to make immediate withdrawals – before the transaction was approved and funded.

Beane allegedly used the scheme to “buy” $30 million in CDs and managed to liquidate nearly $2 million before USAA discovered the deceit.

FBI Agent Parker Still told jurors his agency learned about the fraud scheme around the same time Beane was making plans to buy the motor home – a palatial recreational vehicle with two bathrooms, marble floors and countertops and pop-out side rooms – from Buddy Gregg Motor Homes in Farragut in July.

“All of a sudden we have information Buddy Gregg was going to turn over this mobile home to him,” Still testified. “I literally jumped up from the computer … and we ran out the door. We were flying down (Interstate) 40 with our lights on.”

When agents arrived, Still said Beane was behind the wheel of the motor home, which was running, as he prepared to leave Buddy Gregg.

The agents repeatedly yelled at Beane to turn off the motor home and come out, Still said, but he refused.

“We immediately grabbed Mr. Beane,” Still said. “He (was) resisting. I told him to stop resisting.”

He didn’t, and two of his friends videoed the fracas with law enforcement that left Beane with a wound to his head, for which Still said he later refused treatment.

“I was provided a piece of paper with the name ‘Heather’ on it … (and told) that this was an attorney (for Beane) you should call,” Still testified.

Still did call, and Tucci-Jarraf told him she was an attorney and made reference to a role in “military operations.” She is accused of helping Beane set up a trust to try to hide the motor home purchase.

Still said Tucci-Jarraf was arrested a few days later outside the White House after the FBI got a tip from the U.S. Secret Service that she was demanding a meeting with the president.

Neither Beane nor Tucci-Jarraf made an opening statement in Tuesday’s trial. Tucci-Jarraf asked Still during cross-examination if his agency had or would investigate the Federal Reserve Bank – another government institution Sovereign Citizens insist is illegitimate – for “using unsuspecting American citizens” in a financial scheme she did not explain.

Beane used his questioning of Still to complain about his arrest.

“Do you remember laughing at me, poking at me?” Beane asked, adding that he was in the back of a patrol car at the time.

Still conceded he laughed when Beane was finally wrested to the ground, handcuffed and placed in a patrol car.

“It was a stressful situation,” Still said. “I’m sure there was laughter.”

It’s not clear yet what specific defense to the charges Beane and Tucci-Jarraf intend to mount. In court pleadings, they’ve used traditional Sovereign Citizens tactics, including filing “declarations” challenging the federal government’s authority and legitimacy.

19 Comments to “ #HATJ: Pair of ‘Sovereign Citizens’ stand trial in Knox; one sought meeting with Trump”