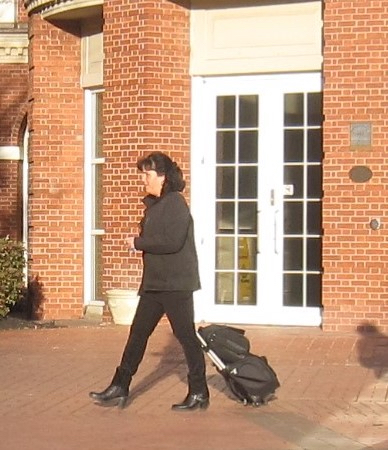 BZ note: Its been a wild ride getting the info out. Heather and I had a phone call to record information she wanted to get out regarding this, but my phone recording device’s were all jammed and nothing could be recorded. Just on the call with Heather ;- 0 … not equipment malfunction.

Terran note: Its taken nearly 5 days to get these message due to unprecedented interference from the Knox County Jail email system.  There may be yet some more to add to Part 4 so check back…

On 4-15-18, I was moved to B-POD, 2B/112. On 4-16-18, at aproximately 1:30 p. m. , I was ordered by Officer King to report to MH. I promptly notified Officer King that I did not request a MH visit. She responded she did not know why but thatI had to go. I asked who told her I was to report to MH, and she responded, “Officer Warren”. I thanked her, stated that I understood she was only following orders, and further stated that I would ask Officer Warren for the clarifications.

When clarification was requested from Officer Warren about “why” I was called by her to go to MH, she responded, “I don’t know”. I asked “who” gave the order for me to see MH. Officer Warren responded, “I don’t know”. I notified her that I already notified local attorney Francis Lloy, and he notified USM Sanchez about the first attempt to have me go to MH due to a request for pads, and that if it was for another reason, the facility could notify Francis Lloyd and USM Sanchez what the basis and request was for, and until said was provided, I refuse a purported MH visit/evaluation for due cause. I asked if there was a refusal pape I needed to fill out and sign. Officer Warren pointed to the open-doored room, and said see MH to do the refusal.

I acknowledged I would do so, and went directly to the threshhold of the open-doored MH room…

See PT 1, restated and incorporated here by reference, as if set forth in full.

A woman, later identifying herself as “Nurse Clement”, was sitting at a desk with a computer… that she referred to repearedly the entire time I was in her presence… and other office equipment nearby. She was the same woman that had been in the room on 4-13-18. It was clear she had been listening to the conversation I just had with Officer Warren just before arriving to her door. I stood and repeated that I had not requested a MH visit, that there was a possible misunderstanding from 4-13 when I requested pads, and that I would be refusing said visit/evaluation, for due cause.

I asked for her name, and she gave it. I asked for clarification of why I was called to see her. She stated I was on her list last week and was never taken off her list. I asked her who had put me on the list. She did not know. I asked her how someone is put on that list. She stated that people will make comments that they want to hurt themselves, they’re depressed, etc. I asked if someome had made a report that I spoke such things, which I never have, and never would. She stated she did not know, that I was just on her list. I asked her to the effect that, “Would that be information Francis Lloyd and USM Sanchez would have to ask for?”….Nurse Clement responded with, “Do you think USM Sanchez is assigned to you?… as a…?? ” I stated that I am aware that USM Sanchez is managing, in part, the FED contract with this facility and that Francis Lloyd is the local attorney I have been working with, and that they would have to get the answers to my questions of who put me onthat list, and why… since, thus far, the officers/staff wer incapable or unwilling to provide the answers.

I stated, again, that I did not ask for the MH visit/eval, they could contact Francis Lloyd and USM Sanchez with the proposed request/basis, and that I was refusing the MH visit/eval. I asked if thee was a form for the refusal that I had to sign. She responded, “yes, I am trying to print it for you, but it’s not printing for some reason. ” I asked her if she could just deliver it to the pod when she could get it to print. She said yes. I said great and started to back out of the room. She became notably more animated from that moment on, looked at her screen, and then quickly launched into a series of questions regarding a current incident happening at a S. C. prison…

Nurse Clement pointedly asked me questions regarding the S. C. prison incident. I stated I read the FOX NEWS article this morning that reported the incident, without details, except one… that SLED had been sent in.

Nurse Clement then began relating posible details of that violence, riots, etc, and using them in comments and scenarios here. One specific comment she made, was that inmates could gang up and be violent to a pod officer. I promptly replied to that specific scenario, that if I was present during such a scenario, I would get between the pod officer and the inmates to protect the pod officer until additional help came for the officer, and all facts, video, etc. , could be gathered. There is no just cause, in my years of experience and expertise, for any violence…. ever. I again asked her to just drop off the purported refusal form.

She then handed me a printed form. I asked her if we could make a copy of my actual issued refusal. She had no copier, and printed two copies of the exact same form for us to issue. I read the purported “refusal form”. I asked her if this is the “refusal form” they give all inmates. She confirmed it was. I pointed out specific language, i. e. title, content, etc. that specifically and expressly stated it was a “Release of Liability” form, see Email -“PT 4”, restated and incorporated by reference here, as if set forth in full, specifically and particularly Section I., for actual original verbiage presented to me. I asked her if there was an actual “Refusal Form”, and she indicated this is the only form they gave her to have issued in the event there was a refusal of a MH visit/eval.

I then proceeded to create an appropriate, lawful, and legal refusal of offered Mental Health services, see Email- “PT 4”, restated, specifically and particularly Sction II. , for actual verbiage of “REFUSAL, FOR DUE CAUSE”, duly issue by me in duplicate.

i gave Nurse Clement one of the original duplicates I issued, shook her hand, thanked her, and returned to central desk.

I believed there may be a mistake on said duplication of the REFUSAL, FOR DUE CAUSE… Nurse Clement heard my comment and request to Officer Warren to return and fix it, and she came out, without prompting, to the central desk with her duplicate I had issued. After final review, all was found to be in order.

i expressly stated that I DID NOT AND DO NOT give consent to having a Mental Health Evaluation/Visit.

That due tothe fact no RDWDF employee was capable owilling to identify who put me on the list to see Mental Health, nor the basis forputting me on such list, that id employees could submit all future requests, with identifications of requester, and basis for requesting me to have a Mental Health visit/evalation, with Francis Lloyd and USM Sanchez, for our review, consideration, and my final informed decision to be made of whether to permit such visit/evaluation or not.

NOTE: Part 4a. and 4b. seem to be missing inquiring with Heather about that….

TO: FRANCJS LLOYD
TO: USM SANCHEZ

I repeated again that I did not request or consent to a Mental Health Visit/Evaluation. I again notified her to just drop the purported “refusal form” I was told HAD to be signed off at B-POD when it finally printed. She promptly handed me two forms, both identical, see the verbiage in PT 4.a. I reviewed the proffered form, and was shocked. I asked her if they give this form to all the inmates, and tell the inmates that it is a refusal form. She stated that is what she has been given to give inmates that wish to refuse services. I told her I did not know the facility’s attorney, but that I recognize the form she gave me to be a release of liability form…an immunity form… a hold-harmless declaration… NOT A REFUSAL. I showed her the specific and particular verbiage. Nurse Clement said that is all they gave her.

I took both identical copies, crossed/scribbled out non-applicable and inappropriate language, inserted applicable and appropriate language to create a lawful and legal refusal form. I signed both of the identical REFUSAL forms I created, without prejudice. Nurse Clement also signed both identical forms. I reviewed the finished documents one more time. I presented her with one, for her records, and I left the office with the other.

Bill, please also copy to BZ since I apparently cannot get emails directly to her <3 p=””>