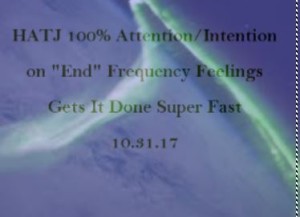 There was a conference call lead by Bob Wright on October 31, 2017. To connect with people and give more clarity on the process to bring the pulling back and tearing down of the curtain on the Duality Reality to a Swift conclusion. This would include the court case in the Eastern District of Tennessee, the TDDA accounts, and the Totality of ALL things that are not Source Original.

I have created a video of the complete call, titled- #HATJ-100% Attention-Intention on “End” Frequency Feelings Gets It Done Super Fast!

I also created three other videos from the conference call. They provide helpful insights and powerful tools to help you move through these moments and navigate the expansive energy frequencies as everything speeds up and the old comes crumbling down so that the New can burst forth into beautiful bloom.

4 Comments to “ #HATJ-100% Attention-Intention on “End” Frequency Feelings Gets It Done Super Fast!”