By Lee Maddox, published on Wake Up World, September 3, 2013 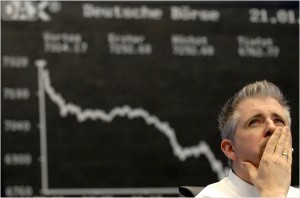 The fuse for the next global financial meltdown may have just been lit. A recent article published 3rd August 2013 by the Daily Mail Online reveals some interesting, albeit unassuming, information regarding the situation of global finances.

In what seems like a very strange move by one of the world’s biggest banks, HSBC has “sacked” some of their biggest clients. But before we go on, let’s take note of the terminology used by the Daily Mail. What does it mean to be “sacked”? It means your employer has terminated your employment. So is the Daily Mail inferring that the type of relationship HSBC had with over 40 embassies, consulates, High Commissions and even the Vatican was that of employer over employees? After all, history shows us that the borrower is servant to the lender. So maybe it’s more like Master over Slaves?

Now we also see that the institutions mentioned above are struggling to find another bank, as most of the City of London banking cartel follows the lead of HSBC.

What does this mean?

Firstly, it seems like the Daily Mail is only focusing on the odd move of these banks rather than the underlying message. Here are the first few sentences of the Daily Mail article:

“Diplomats in London have been thrown into chaos after Britain’s biggest bank, HSBC, sacked them as customers and gave them 60 days to move their accounts. Their situation has been made far worse because other banks have been closing ranks and refusing to take their business. More than 40 embassies, consulates and High Commissions have been affected. Even the Vatican has been given its marching orders.”

After reading the article you may still be left wondering why a global financial powerhouse like HSBC has sacked more than 40 embassies, consulates and High Commissions as customers, and given them 60 days to move their accounts.

Are we seeing the Hegelian Dialectic in motion once again, where a political “problem” is created to generate a reaction from the public so a predetermined solution can then be implemented? Maybe.

Could it be that the banking cartel has just lit the fuse and given countries around the world 60 days to implement their own versions of the Cyprus style “Bail-ins” before the world’s biggest financial crisis yet?

Are we being steered to implement even more protections for those deemed “too big to fail” before another financial crash is generated – at our expense?

There have been some key indicators here in Australia that provide substance to the hypothesis above. For example, the current caretaker Prime Minister, Kevin Rudd, is currently spearheading the push for “Bail-in” legislation in Australia. Here is an excerpt from a previous article I posted on realnewsaustralia.com on 1st August 2013:

But upon taking back the Lodge [Prime-Ministership], Rudd, who had initially signed Australia on to the agenda at the G20 meeting in London in 2009, immediately stepped up the plans by appointing as his chief of staff senior Treasury official Jim Murphy, one of a handful of Australian members of the FSB – which is directing the bail-in program.

Rudd’s next step is to make sure he is at St Petersburg for the G20 leaders summit in September. Australia has a leading role in the G20, because we are scheduled to host the 2014 G20 conference in Brisbane. As such, Australia is already part of the so-called G20 Troika, the three-member steering committee of the past chair (Mexico), the present chair (Russia) and the future chair (Australia), and will take over G20 chairmanship on 1 December.

In preparation for the September summit, the G20 Finance Ministers and Central Bank Governors, including Rudd’s Treasurer Chris Bowen and Reserve Bank Governor Glenn Stevens, met on 19-20 July, and issued a communiqué declaring their agreement that each country will plough ahead with implementing bail-in.

Point 22 of the communiqué reads: “The FSB will report to the St Petersburg Summit on the progress made and next steps towards addressing the ‘too big to fail’ issue. We strongly support the work to establish robust resolution regimes and resolution plans consistent with the scope and substance of the FSB’s Key Attributes of Effective Resolution for any financial institution that could be systemically important beyond the banking sector, and look forward to pilot assessments by the FSB, IMF and World Bank using the Key Attributes’ assessment methodology. We will undertake any legislative and other steps needed to enable authorities to resolve financial institutions in an effective manner, including in a cross-border context. We further encourage the FSB and IMF to continue work to address cross-border resolution issues…”

For more on how “Bail-in” style legislation is being rammed through parliaments around the world, please read: Defeat the Bail-In: Pass Glass-Steagall to Bankrupt City of London, Wall Street

The article in the Daily Mail continues by discussing the shoddy practices of HSBC and the fines it had to pay to US authorities – to the tune of $2 billion (£1.32 billion).

“HSBC was blamed for alleged money-laundering activities said to have been conducted through its Latin American operations by drug cartels. HSBC admitted at the time that it had failed to effectively counter money laundering.”

These types of money laundering operations carried out by banks like HSBC shouldn’t go overlooked and deserve more publicity. However, reporting the HSBC’s actions without examining the rush to create “bail-in” legislation simply serves as a way of distracting you from the real message hidden in the story. With all this going on, the underlying message is clear:

HSBC may have just signaled the countdown to the next big financial crash. Hold on tight and take measures to secure your finances. We’re in for a rough ride soon.

3 Comments to “ Has HSBC Just Signaled the Countdown to the Next Big Financial Crash?”